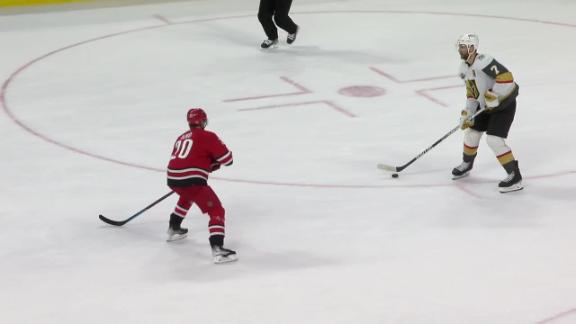 RALEIGH, N.C. -- - Sebastian Aho's second goal of the game 3:49 into overtime gave the Carolina Hurricanes a 4-3 victory over the Vegas Golden Knights after blowing a two-goal lead late in regulation Tuesday night.

Nino Niederreiter and Vincent Trocheck scored 57 seconds apart in the second period and Aho had a power-play goal in the third for Carolina. Andrei Svechnikov's second assist of the game came on the winning goal.


"A great read by him," Aho said. "Reading that play, he won his battle there. He wanted that puck."

Aho set the franchise record with his seventh career overtime goal, one more than Jeff O'Neill. It was Aho's second overtime winner this season.

The Hurricanes bounced back from one of their worst outings of the season three nights earlier. Frederik Andersen made 26 saves as Carolina won for the fourth time in five games.

"A win is a win. We'll take those two points for sure," Aho said. "That's a quality team out there against us. Obviously, you don't want to lose a two-goal lead in the third. It really didn't change the way we played."

Nolan Patrick had a goal and an assist, and Brett Howden and Nicolas Hague also scored for the Golden Knights, who were coming off a 1-0 victory Monday night at Washington. Laurent Brossoit made 26 saves.

The Hurricanes never trailed, but Howden's goal with 6:52 left in the third period and Hague's score with 2:30 remaining allowed the Golden Knights to pull even.

"Over a long season, it's important to find a way to get a point in games like this," Vegas coach Peter DeBoer said after his team fell to 5-3 in overtime games.

The Hurricanes are 2/3 in overtime games after Aho's team-leading 19th goal of the season. Every other team in the NHL had already been in five or more OT sessions.

"I liked how we got right back on in overtime," Carolina coach Rod Brind'Amour said.


The Golden Knights had won seven straight road games. Their next two games are at Florida and Tampa Bay, the top teams in the Atlantic Division.

"We just have to hang in there these next couple of games," Vegas right wing Mark Stone said. "It's going to be a tough trip."

Carolina's 7-4 loss Saturday night at New Jersey marked only the third time this season it allowed more than four goals.

Carolina has a Metropolitan Division-leading 14 wins on home ice. Niederreiter is a big part of that with 10 of his 12 goals coming at home.

"He has been good this year," Brind'Amour said. "He has been steady and that has been real important."

The latest win came against a Vegas team that holds a 12-5-1 road record, among the best in the NHL.

The Hurricanes have won 14 games apiece at home and on the road.


Brossoit appeared for the first time in eight games. He is 2-1-1 vs. Carolina.

Even though Robin Lehner logged the shutout at Washington, there might have been a reason he was given the night off. He's 0-6-0 against the Hurricanes.

The Hurricanes had most of their roster back in place, with Teuvo Teravainen returning following a one-game absence with a lower-body injury.

Golden Knights: At the Florida Panthers on Thursday night.

Hurricanes: At the Ottawa Senators on Thursday night.