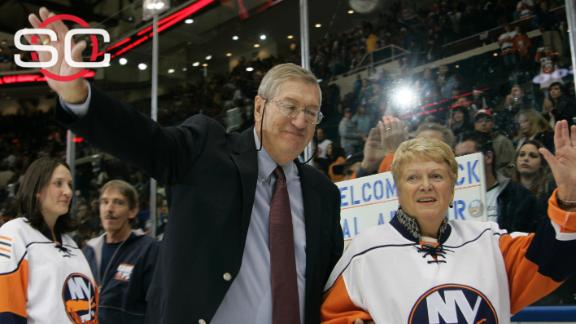 Hall of Fame coach Al Arbour, who guided the New York Islanders to four consecutive Stanley Cup championships in the 1980s and ranks as the NHL's second-winningest coach, has died at age 82, the team announced Friday.

The cause of death is unclear, though Arbour was battling Parkinson's disease and dementia. He had been living in Florida.

Arbour transitioned from a successful 14-season NHL playing career as a defenseman to become one of the league's all-time best coaches.

He coached 1,500 regular-season games over 19 seasons with the Islanders after he was hired at the start of the 1973-74 season. He retired after the 1994 playoffs but returned in 2007 at age 75 to coach one more game for the team -- a 3-2 victory against the Pittsburgh Penguins.

"Al will always be remembered as one of, if not, the greatest coaches ever to stand behind a bench in the history of the National Hockey League," Islanders president and general manager Garth Snow said in a statement released Friday by the team. "The New York Islanders franchise has four Stanley Cups to its name, thanks in large part to Al's incredible efforts.

"From his innovative coaching methods, to his humble way of life away from the game, Al is one of the reasons the New York Islanders are a historic franchise. On behalf of the entire organization, we send our deepest condolences to the entire Arbour family."

Arbour won 119 playoff games -- an NHL record for a coach with one team -- over 15 postseason appearances and hoisted the Stanley Cup each postseason from 1980 to 1983. He finished his coaching career with 740 victories and was elected to the NHL Hall of Fame in 1996.

Overall he had a 782-577-223 record, including three seasons coaching the St. Louis Blues, and ranks second on the NHL win list behind Scotty Bowman.

NHL Commissioner Gary Bettman said Arbour was brilliant as a tactician and a coach.

"Al Arbour directed the Islanders' rapid transformation from expansion team to NHL powerhouse," Bettman said in a statement released by the league. "As it grieves the loos of a profound influence on coaching and on the game itself, the NHL sends its heartfelt condolences to Al's family and friends, to his former teammates and to all the players he motivated."

"Every player that I talked to that played for him had great respect for him as a player and coach," former Islanders coach Scott Gordon told ESPN. "I always enjoyed when we played down in Florida. He would always come by the coaches office to say hello."

Said Boston Bruins president Harry Sinden: "Al Arbour was one of the greatest and most respected coaches of his time in the National Hockey League. I do not know a coach of any team that was looked upon with such high regard as Al was during his time with the Islanders. He was a wonderful human being and I got to know him quite well when we were no longer competitors. His passing is a sad day for all of hockey."

Arbour's death comes at a time when the Islanders are in transition. The franchise is moving from its longtime and outdated home -- Nassau Coliseum -- in Uniondale, New York, to Barclays Center in Brooklyn this season.

Arbour was born in Sudbury, Ontario, and broke into the NHL with the Detroit Red Wings during the 1953-54 season. He won Stanley Cup titles with the Toronto Maple Leafs in 1962 and 1964 as well as with Detroit in 1954 and Chicago in 1961. He retired following the 1970-71 season after four years in St. Louis.

The defensive-minded Arbour finished his career with 12 goals and 58 assists in 626 games.

His survivors include his wife, Claire, and children, Joann, Jay, Julie and Janice.

Joe McDonald of ESPN.com and The Associated Press contributed to this report.