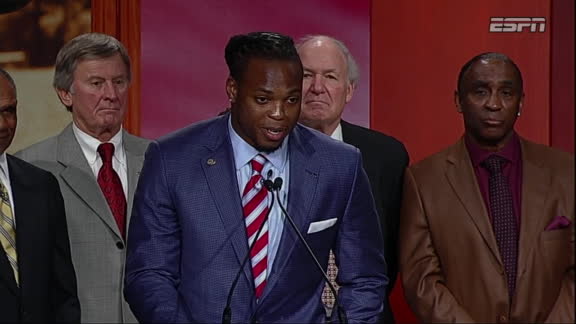 Alabama's bulldozer of a tailback with the super-sized workload won the 81st Heisman Trophy on Saturday night,capping a junior campaign in which he rushed for an SEC-record 1,986 yards -- previously held by 1982 Heisman winner Herschel Walker -- on 339 carries and scored a conference-record-tying 23 touchdowns.

"I'm just so thankful to have this trophy," Henry said. "It's just a blessing and an honor."

Henry was considered the favorite going in, though it didn't make it any easier for him.

"I didn't know at all," he said. "Them two guys were great contenders for the trophy. Deshaun, with how consistent and efficient he is at the quarterback position, all the success he had, I was kind of worried. Christian, breaking Barry Sanders' record, doing all the things he does, he's just unbelievable."

The moment right before the winner was announced was the toughest for Henry.

"My heart was about to bust out my chest. I thought I was going to have a heart attack," he said.

OklahomaquarterbackBaker Mayfield, who some thought should have been among the finalists sent to New York, finished fourth with 334 points. Navy quarterback Keenan Reynolds finished fifth with 180 points, the highest service academy finisher since Roger Staubach won it in 1963.

Henry is the first running back to claim the Heisman since 2009, when Crimson Tide running back Mark Ingram became the first Alabama player to win the award. In 2009, Ingram edged runner-up Toby Gerhart -- a Stanford running back -- by a single percentage point, the narrowest margin of victory in the history of the award. The Heisman went to quarterbacks in the five years that followed.

He choked up during his speech, thanking his family and coaches, and was effusive in his praise of his teammates.

"Coming into Alabama from Florida, they all accepted me, they all loved me and all supported me," he said. "And this season, they've seen me as a leader, taken me as a leader. [The offensive line] takes pride in controlling the line of scrimmage, making sure I have success, and through this year, looking at these guys, the courage they had in me, the faith they had in me, I knew I couldn't let them down.

"Everybody always asks me about carries, what I thought about it, how I felt, but when you got teammates like that who love you and care for you, it don't matter how you feel or how bad it hurts, you've got to make sure you're making those guys happy by helping them win, getting a victory."

He also mentioned former Alabama teammate Altee Tenpenny, who was killed in a car crash two months ago.

Henry led the country in carries, rushing yards, rushing touchdowns and yards after contact. The 6-foot-3, 242-pound junior was second among Power 5 backs in carries of 25 yards or more.

Henry was born to teenage parents and raised with the strong influence of his grandmother, Gladys, in the small north Florida town of Yulee, which is just outside of Jacksonville, but very much country living.

Gladys Henry has been hospitalized for weeks in Florida with heart and respiratory problems. Derrick Henry said his grandmother was with him in spirit as his childhood dream of winning the Heisman came true.

Henry came to Alabama as a five-star recruit. Before the Heisman came a dose of humility. For the first time football wasn't easy. Being bigger, stronger and faster wasn't enough in Tuscaloosa, Alabama.

"One day I said something to him and he said, 'Coach, all this stuff is new to me. All they did in high school was turn around and toss me the ball and I ran with it,'" Saban said. "I really appreciate his hard work at becoming a complete player."

He was a backup on a crowded depth chart as a freshman and thought about transferring, but with the encouragement of his family decided to stay put.

As a sophomore he shared carries with T.J. Yeldon and ran for 990 yards and 11 touchdowns, showing signs of big things to come.

This season, with Alabama breaking in a first-time starting quarterback and inexperienced receivers, Saban and the Tide decided to hook the offense to Henry and let him lead the way.

The Tide hammered away with Henry and he set a school record for carries with 339, including an astounding 90 in Alabama's last two games against Auburn and Florida. He had four 200-yard games in the second half of the season. He went for 210 against LSU to move to the front of the Heisman race, and had 271 yards in the Iron Bowl against Auburn.

Weary defenses got plenty of looks at big No. 5 from behind, his long bundled locks sticking out of the back of his helmet.

After Ingram won the Heisman in '09, he helped Alabama win the national championship about a month later. Henry will try to do the same. He will power No. 2 Alabama into the College Football Playoff semifinals against No. 3Michigan State. They meet Dec. 31 in a College Football Playoff semifinal at the Goodyear Cotton Bowl Classic in Arlington, Texas, as the Tide seek a fourth national championship in nine seasons under Saban.

Henry has not announced his intentions yet, but a jump to the NFL seems likely after this season.