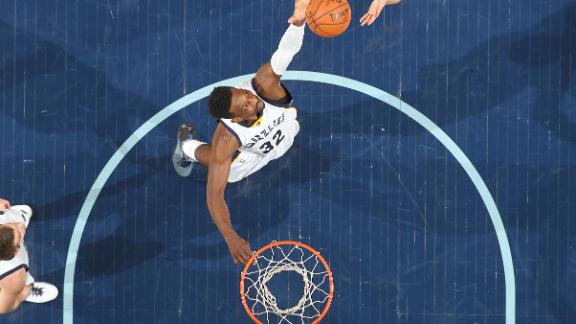 MEMPHIS, Tenn. -- What players described as a nightmarish road trip for the Portland Trail Blazers took another scary turn when star center LaMarcus Aldridge and forward Nicolas Batum were injured in Saturday's 97-86 loss to theMemphis Grizzlies.

An X-ray taken on Aldridge's left hand Saturday night was negative, but the All-Star forward said he was uncertain how soon he would return from the injury. Aldridge already had been playing with a torn ligament in his left thumb the past two months, but indicated the pain and swelling just below his wrist Saturday felt worse than what he had experienced with that injury.

"I already had my thumb messed up, so not being able to use my hand was just too much," said Aldridge, who finished with 16 points and five rebounds in 18 minutes. "They said it wasn't broken, so that's good. I'm going to take my time, try to let it go away. I had prior issues and I don't want to come back and not be able to use my left hand at all. I'm not going to rush it."

The team said both Aldridge and Batum would be re-evaluated when it returns to Portland. The losses and injuries both continue to pile up for the Blazers, who extended their season-long losing streak to four games. Portland (44-24) has dropped five of eight games since starting shooting guardWes Matthewssuffered a season-ending torn Achilles in a March 6 win against Dallas. The team also lost reserve center Chris Kaman to a shoulder injury during Friday's loss in Orlando.

The injuries have decimated the Blazers at a crucial stretch with a month left in the regular season. Portland returns home to face Golden State on Tuesday to open a stretch of four games in five nights. Aldridge, who is averaging a team-best 23.6 points and 10.5 rebounds this season, has had problems with both hands this season. He tore the ligament in his right thumb during a Jan. 19 win against Sacramento and missed the next two games before he decided to put off surgery until after the season.

Aldridge then bruised the thumb on his right hand and sat out a Feb. 22 home loss to Memphis.

Batum, regarded as one of the league's best wing defenders, is averaging 9.6 points and 5.9 rebounds this season. Aldridge's latest injury setback came when Memphis guard Tony Allen swiped down on Aldridge's hand as he attempted to steal the ball in the first quarter. Aldridge said after the game he immediately lost all feeling and strength in his hand and ultimately decided he couldn't help the team.

"When it rains it pours, you know," Aldridge said of the injuries and recent losses during the trip. "It's been a nightmare. I've been here nine years and I've seen things like this happen through the course of my years here in Portland. It's part of the sport. [It's] a bad time for us, because it is a time when you want to be peaking and playing your best basketball."

The Blazers are currently fourth in the Western Conference with 14 games left in the regular season. Portland coach Terry Stotts said he appreciates the sacrifice Aldridge has made to fight through the thumb injuries in hopes of helping the team make a deep run in the playoffs.

"I never like using the word 'surprise' with him, because he does it every night," Stotts said. "I admire the way he battles. He does take a lot of punishment and plays through pain."