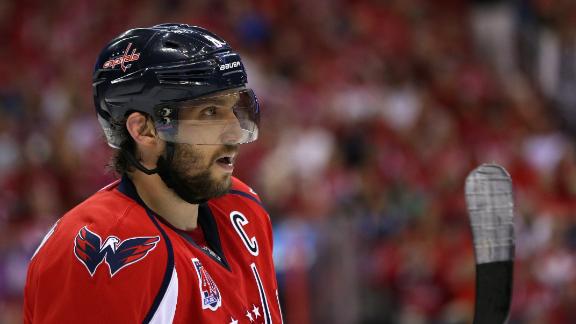 WASHINGTON -- Capitals captain Alex Ovechkin expressed confidence that his team will punch its ticket to the Eastern Conference finals, as the superstar forward guaranteed a victory against the New York Rangers in Game 7 of their second-round series.

The Capitals led the series 3-1 heading into Game 5 but have dropped two straight against the Rangers. Ovechkin has not scored in the past four games.Game 7 is Wednesday night at Madison Square Garden.

New York surmounted a 3-1 series deficit against the Pittsburgh Penguins in the semifinals last spring en route to its run to the Stanley Cup finals.

Ovechkin's comments, which were less emphatic than those of former Rangers captain Mark Messier's guarantee before Game 6 of the Eastern Conference finals back in 1994, were made after the team squandered its second opportunity to close out the series against the Presidents' Trophy-winning Rangers.

The Capitals fell behind 4-1 at Verizon Center before scoring twice in the third period. The Capitals have reached the Eastern Conference finals only twice, and never during Ovechkin's tenure.

"I'd rather have that than a leader go, 'Well, we're going there to lose.' I mean, come on. What do you expect a player to say? I love that."