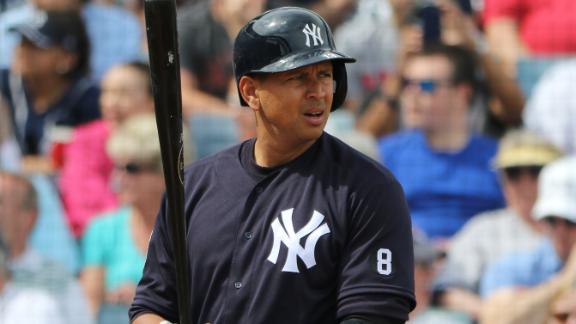 Alex Rodriguez plans to retire after his contract with theNew York Yankeesends following the 2017 season, the designated hitter told ESPN on Wednesday.

"I won't play after next year," Rodriguez said. "I've really enjoyed my time. For me, it is time for me to go home and be Dad."

Rodriguez's retirement will end what has been a legendary career full of controversy. The veteran slugger will turn 41 on July 27, and he is signed through next season -- the final year of a 10-year, $275 million contract.

He missed the entire 2014 season after being suspended for the use of performance-enhancing drugs.

Rodriguez enters 2016 with 687 career home runs, 3,070 hits and 2,055 RBIs. He needs just 28 home runs to pass Babe Ruth for third on the all-time list. He is 69 away from passing Hank Aaron for second, and he needs 76 more to overtake Barry Bonds and become the all-time home run king.

"It's been a lot of fun," Rodriguez said. "It has been very challenging at times, but it has been an incredible learning experience. I would say that the two years that I've probably enjoyed the most were my first when I was 19 and won the batting title with [Ken] Griffey and last year. The contrast of those two, at 40 and 18 or 19. It is hard to believe."

The 20-year veteran was one of baseball's most improbable success stories in 2015, turning back the clock in several offensive categories after serving the yearlong ban. Rodriguez tallied his highest number of home runs (33) and runs scored (83) since 2008, his most at-bats (523) and games played (151) since 2007, and his best slugging percentage (.486) since 2010.

His 33 home runs last season were the sixth-most in MLB history for a player 39 or older.

In recent years, the Yankees have had retirement tours for Mariano Rivera and Derek Jeter. Given Rodriguez's up and down history, he is not expecting the same time of treatment, despite how much he has rehabilitated his image.

"I'm certainly going to enjoy, but hopefully it is just low-key," Rodriguez said. "I haven't thought that far ahead, to be honest with you."

Later on Wednesday, Rodriguez told two New York tabloids that, "I'm thinking in terms of my contract, which ends in 2017. After that, we'll see what happens."

Although he loved his experience as an analyst, A-Rod said he doesn't know if he wants to pursue a career in TV after he retires. Rodriguez could try to own a team, but he declined to really entertain that possibility, at least at this point.

"I'm still at first base; I have a lot of work to do," Rodriguez said. "I think MLB, [commissioner] Rob [Manfred], [COO] Tony Petitti and [MLB chief communications officer] Pat Courtney, those people deserve a lot of credit for even allowing me to come back and even continue my career."

Rodriguez will have made $420 million in salary by the end of the 2017 season -- the first American professional team athlete to pass the $400 million salary mark. The next closest is the NBA's Kevin Garnett at $326 million.

A year ago, Rodriguez was looked upon as a pariah entering spring training for the Yankees after his suspension. He rehabilitated his image throughout the year, but felt a real connection to fans, he said, after his work on Fox during the playoffs.

"I get treated better today than before my screw-ups," Rodriguez said. "That is hard to believe and it is hard to comprehend sometimes, but I'm grateful for it."