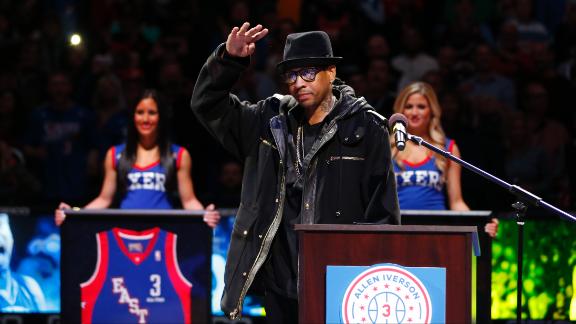 The Philadelphia 76ers continue to be mired in a lengthy rebuild, but could the answer to their woes come from The Answer?

Sixers legend Allen Iverson has said he would be interested in working in some capacity within the team's front office.

"I would like to be even in that war room," Iverson told Comcast SportsNet Philadelphia on Tuesday night. "Even if they don't go with my decision or whatever, just to have an opinion and putting out what I think and trusting the organization to do what's right."

Iverson knows a thing or two about the draft, having been the No. 1 overall pick going to Philadelphia in 1996.

A former MVP and 11-time All-Star, Iverson played parts of 12 seasons in Philadelphia and led the team to its last appearance in the NBA Finals in 2001. His No. 3 was retired by the franchise last season.

While infamously known for his disinterest in practice, Iverson's talent and toughness were never questioned, and that's one thing he says he might be able to evaluate better than most.

"Their fight," Iverson said. "Their fight. The fight in a guy. I'm the biggest [Russell] Westbrook fan I think there is. You know what I mean? Because he reminds me so much of myself as far as his heart and laying it on the line night in and night out. This is a guy who's going to bring it every single night."

The Sixers could use some extra fight. At 16-52, they are ahead of only the New York Knicks (14-54) in the Eastern Conference and have just one winning campaign in the past 10 seasons.