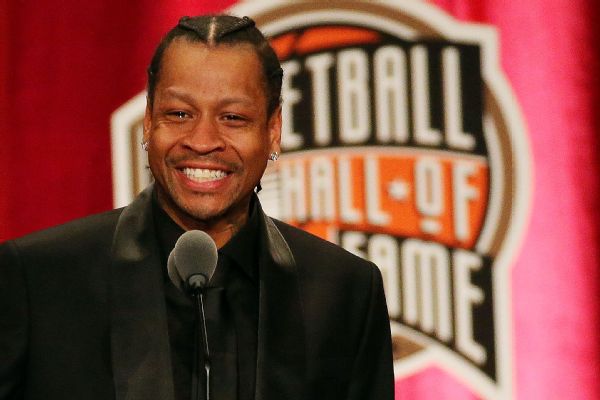 NEW YORK -- Allen Iverson, Kenyon Martin, Chauncey Billups and Stephen Jackson are among a group of retired NBA players who have committed to participating in a 3-on-3 league founded by the entertainer Ice Cube.

"When I got the call it was a no-brainer, it's Ice ... you don't turn that down," Iverson said at a news conference in New York on Wednesday to introduce the league. "That's success looking you right into your eyes. I just wanted to be a part of it and I hope that me being a part of it makes it a success like everything he's been doing in his life."

Iverson, the 2001 NBA MVP, an 11-time All-Star and Basketball Hall of Fame member, retired from the league after the 2010-11 season. He expressed excitement about playing in front of a new younger generation of fans.

"I'm going to put my effort into it to make sure it can be as big as ever," he said.

Martin expressed similar sentiment about the league, named the BIG3, which will begin play this summer.

Iverson will be a player-coach and former NBA stars Gary Payton and George Gervin have committed to serve as coaches for three of the league's eight teams.

A reporter playfully asked Iverson on Wednesday if he chose to play in the league because he wouldn't have to practice -- a reference to Iverson's famous "practice" rant while with the 76ers.

"How could you be a four-time scoring champion, 11-time All-Star and MVP in the league if you didn't practice?" he said.

Games will be played in half-court settings and will feature 4-point shots, designated by three large circles several feet beyond the traditional 3-point line. Games will be played to 60 points and there will be a seven-minute halftime once a team reaches 30 points.

Ex-professional players over the age of 30 will be eligible to play. Teams will consist of a player/captain and four teammates and there will be a draft in March.

League play will start on June 24 and conclude on Aug. 12 with games being played every Saturday in different cities. All teams will play games on each Saturday. Players will receive 52 percent of league revenue.