Allen Iverson: 'Not going to keep on' defending myself 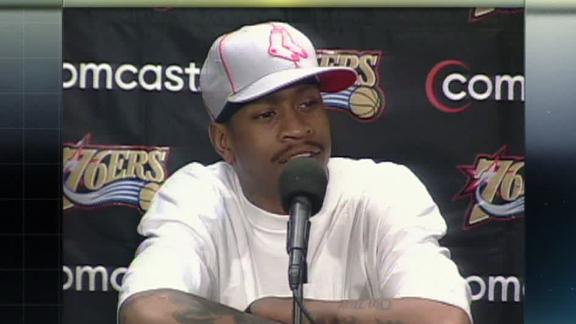 Allen Iverson has a message for his detractors: He doesn't care what they think.

"They don't even know about you, they don't even care about you, so what are you concerning yourself for?" he told the Philadelphia Inquirer at a76ersuniform introduction Thursday night. "I am sick of defending myselfand I am not going to keep on doing it."

Earlier this month, a book was released that painted a less-than-flattering picture of Iverson, including an allegation that he was drunk during his infamous "practice" rant in 2002, a characterization thatIverson flatly denied to ESPN's Stephen A. Smith.

"Me and my family are straight," Iverson told the Inquirer. "I am blessed, I am alive, man, and I am healthy and that is the only thing that matters. Me and my family, everybody else, it really doesn't matter because why do you care about somebody talking negative about you if they don't know you?"

Iverson previously has stated his desire to work for the 76ers' front office, and reiterated that goal again on Thursday.

"I may not know everything about physical talent or anything like that, but I have a sharp mind when it comes to that look, being able to look into somebody's eyes to tell if they are going to be in the foxhole with you tonight or if they are not," he said. "To me, I am a basketball genius and I really believe that, so at any capacity I could help this franchise, that is what I am going to do, whatever they ask me to do."

Admitting that he doesn't watch college basketball -- "But if I had that position, then obviously I would be" -- Iverson pointed to a different example of his knack for scouting talent.

"I know so much about basketball, I knew he was going to be it," Iverson said of his former teammate Andre Iguodala winning Finals MVP with the Warriors this week. "He deserved it."