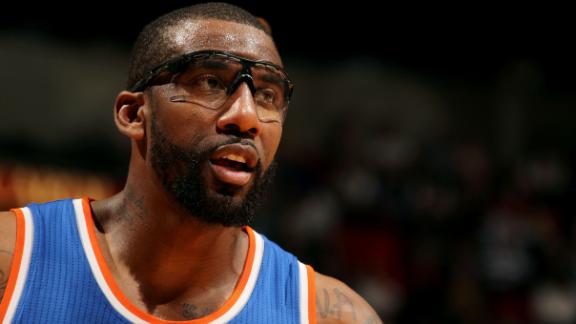 DALLAS --Amar'e Stoudemirehas committed to joining the Dallas Mavericks, according to league sources, giving him a chance to compete for a championship and adding much-needed frontcourt depth to a Western Conference contender's bench.

Stoudemire, who negotiated a buyout with the New York Knicks over the weekend and was officially waived Monday, committed to the Mavs for the remainder of the season on Monday.

The contract will not become official until Stoudemire clears waivers on Wednesday at 5 p.m. ET, making him a free agent. His $23.4 million salary essentially makes the waivers process a formality.

The Los Angeles Clippers and the Phoenix Sunswere among the playoff contenders that expressed interest in Stoudemire, a six-time All-Star who averaged 12 points and 6.8 rebounds in 36 games with the Knicks this season.

However, as ESPN.com reported earlier this month, the Mavs were the front-runners for Stoudemire's services all along.

Stoudemire, 32, has stated a desire to compete for a championship and will get that opportunity with the Mavs, who are fifth in the West with a 36-19 record. That was his reason for requesting a buyout from the Knicks, who have the NBA's worst record at 10-43.

"I feel truly blessed to have been able to play for the incredible New York fans, Mr. Dolan, my coaches, teammates and the entire Knicks organization for the past five years," Stoudemire said in a statement released by the team. "I will be forever grateful for the opportunity to contribute positively on the court and in the community.

"Although I leave the Knicks with a heavy heart, I wish the organization the best of luck. Once a Knick always a Knick."

The Mavs could offer only the prorated veteran's minimum to Stoudemire, who was in the final season of a five-year, $99.7 million deal with the Knicks.

Dallas was attractive to Stoudemire in part because of a pick-and-roll-intensive offense that plays to his strengths. The Mavs also have a highly respected medical staff, led by Team USA athletic trainer Casey Smith, that will maximize Stoudemire's chances of staying healthy for the stretch run and playoffs while dealing with chronic knee problems.

The Mavs envision Stoudemire as a key bench player who will back up center Tyson Chandler and see spot duty at power forward behind Dirk Nowitzki. He will provide the Mavs with a quality replacement for Brandan Wright, the high-efficiency reserve big man the Mavs gave up in a December deal to acquire Rajon Rondo.

How Stoudemire Helps Mavericks
Chris Broussard discusses how Amar'e Stoudemire will help the Mavericks and their chances of contending in the Western Conference.