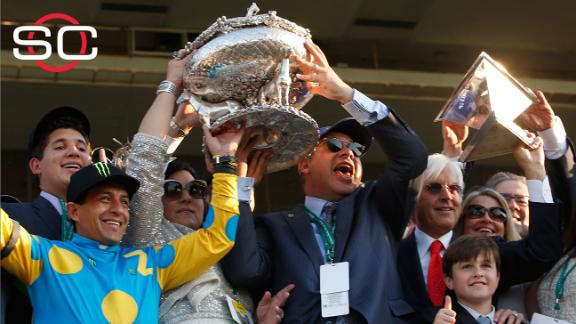 The price to get a genetic piece of American Pharoah is -- not surprisingly -- going to be high.

The Triple Crown horse's owner, Ahmed Zayat, told ESPN.com on Thursday that interest in American Pharoah's breeding has been so great from around the world that Coolmore Ashford Stud, which purchased the majority of the horse's stallion rights, is thinking of charging near-historic prices for a first-year stallion.

"It's their decision and not mine, but the talk is that the stallion fee is likely to open at north of $200,000," Zayat said.

That would be more than three times the opening stud fee of 2008 Kentucky Derby and Preakness winner Big Brown. That horse, whose breeding rights were sold on a reported valuation of $50 million, had an opening stud fee in 2009 -- no doubt discounted by the economic crisis -- of $65,000.

Zayat, who owns 100 percent of the horse on the track and an undisclosed sum as a stallion, said he intends on racing the horse three times before the end of 2015 despite the possible risk that the first Triple Crown winner since 1978 could lose at the track, which could lower the intrigue for potential breeding buyers. American Pharoah's future become clearer later on Thursday when Zayat told ESPN.com's Bob Ehalt the horse will run in the $1 million Haskell Invitational at Monmouth Park on Aug. 2.

Zayat acknowledged that not only did he purchase additional insurance after the horse won both the Kentucky Derby and the Preakness, but he also paid higher premiums to keep the horse insured at his current value after he won the Belmont. Zayat wouldn't say how much the horse was currently insured for and has not, as of yet, announced the races in which American Pharoah will be entered.

Neither Zayat nor Coolmore disclosed the price for American Pharoah's breeding rights, though Zayat did say that there were escalator clauses in the contract that made the price more valuable with each Triple Crown leg win.

Zayat Stables actually owned the parents of American Pharoah and home-bred the horse, but brought him to the 2013 Fasig-Tipton yearling sale to sell him. When buyers weren't bidding what he wanted, Zayat bought the horse back for $300,000.

Investors aren't just interested in the sex appeal of having a piece of a Triple Crown winner, but also can feel confident in American Pharoah's bloodlines. His sire is Pioneerof the Nile, the leading money-winning son of Empire Maker. His family tree also includes Mr. Prospector, whose descendants have now won 43 Triple Crown races.

Pioneerof the Nile, which currently stands at WinStar Farm, is expected to get a nice bump in stud fee thanks to his son's Triple Crown. WinStar president and CEO Elliott Walden told ESPN.com that the horse's fee will rise from $60,000 per live foal to in between $125,000 and $150,000 "depending on how the year ends up."

The all-time record for the highest stud fee is believed to be Northern Dancer, who in the 1980s could command $1 million to breed to a single mare. More recently, Storm Cat commanded a fee of $500,000, before the economic downturn in 2009 lowered all prices at the breeding shed.