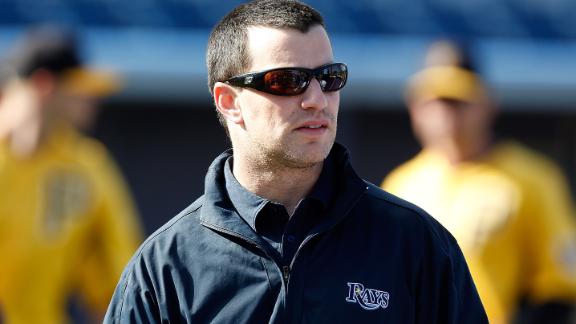 Ned Colletti, who has been the Dodgers' general manager since 2005, will remain with the club in a new role as senior adviser to the president and CEO of the Dodgers, Stan Kasten.

Friedman, who resigned from his role with the Rays on Tuesday, addressed his departure from the Rays in a statement released by the team.

"As I embark upon my next journey, I have only thanks and gratitude to the Rays organization and the Tampa Bay region for a wonderful 10 years together. I am truly grateful for the opportunity to have been part of something so special and for the passion and support of this exceptional fan base," he said.

"The Rays organization is loaded with talent from ownership to players and everyone between. We were able to create together an unbelievable culture that no doubt will continue, and I am absolutely confident that the successes we achieved will continue into the future."

Sources said that Friedman, in his role as president of baseball operations, will be able to hire a general manager with the Dodgers.

Landing Friedman, 37, is a coup for the Dodgers. A handful of teams have tried unsuccessfully to poach the talented young executive with a Wall Street background who piloted the small-market, budget-conscious Rays to six consecutive winning seasons and four playoff appearances after taking over in 2008.

"Andrew Friedman is one of the youngest and brightest minds in the game today and we are very fortunate to have him join our organization," Kasten said in a statement. "The success he has had over the past nine years in molding the Tampa Bay Rays team has been incredible."

This season, however, the Rays finished fourth in the AL East (77-85) after trading away ace left-hander David Price to the Detroit Tigersto get a return on the former Cy Young Award winner before he could leave as a free agent after next season.

Ironically, sources say the Dodgers' failed pursuit of a trade for Price this past summer only heightened their admiration of Friedman. Said one source: "They always asked for the right prospects. Not just the guys everybody knows, either."

In Los Angeles, where the Dodgers had the highest payroll in baseball last season and have an ownership group that's shown a willingness to spend since purchasing the team for $2.15 billion in 2012, Friedman will have no financial pressures to manage.

Kasten has long believed that a strong farm system is the key to organizational success. It's how he and John Schuerholz built the Atlanta Braves in the 1990s. And Friedman's strengths in player development and scouting dovetail perfectly with Kasten's vision.

The Dodgers have won the NL West two consecutive years but have twice lost to the St. Louis Cardinals in the playoffs -- first in the NL Championship Series and this season in the NL Division Series.

This season's failure to advance out of the division series immediately began speculation that Colletti's job may be on the line. However, sources insist that the team's performance in the playoffs is not the reason the team pursued Friedman.

"Ned Colletti has played a major role in the success of the Los Angeles Dodgers over the last nine years and I'm thrilled that we are able to retain him as a special advisor to me," Kasten said in the statement. "Ned's knowledge and experience in the game covering 33 years will be a great asset to the club as we continue to add and build our player development system."

Dodgers manager Don Mattingly will enter the second year of a three-year contract next season.

Friedman's arrival has led to speculation that the Dodgers might make a run at current Rays manager Joe Maddon if they decide to move on from Mattingly.

But Maddon said Tuesday he's happy in Tampa Bay and wants to remain with the team if it can agree to an extension of his current contract, which runs though 2015.

Maddon told the newspaper that he and his wife are "embedded" in Tampa Bay and as far as he's concerned, there's only one drawback to being the Rays' manager.

"There's so much to like. There's only one negative. That's the ballpark. It's a big negative. But that's about it," he told the newspaper.

Maddon owns a home in nearby Long Beach and was a longtime Los Angeles Angels coach. Kasten was asked about the Rays manager on Tuesday.

"I would never discuss a manager or any employee of another team," Kasten said. "Because of his personal relationship, you can talk to Andrew about the whole situation. That's something I don't foresee being an issue at all."

Asked if Mattingly would return as manager next season, Kasten said: "That's my expectation, absolutely, but you'd have to ask Andrew that. We have a lot of stuff that we're not going to discuss with you, but you should expect Donnie to be here."

Friedman and Maddon worked together for nine seasons with the Rays, reaching the playoffs four times and landing in the 2008 World Series. Colletti said his plan is to remain with the Dodgers in the advisory role, though outgoingArizona Diamondbacksgeneral manager Kevin Towers said similar things beforeeventually leaving the club.

Kasten said Colletti has a new contract, though he wouldn't specify the length of the deal.

Asked if he viewed the move as a demotion, Colletti said: "If you want to let pride and ego get in the way, yeah, you could write that," before Kasten interjected, "Wait. We've discussed that. It's a moving-over."

Said Colletti: "They believe I have a chance to continue to impact this organization in a positive way. That's good enough. I want to work. I want to be accountable. I want to be responsible. You know what? Nine years is a long time, especially these nine years because it hasn't always been smooth as glass."