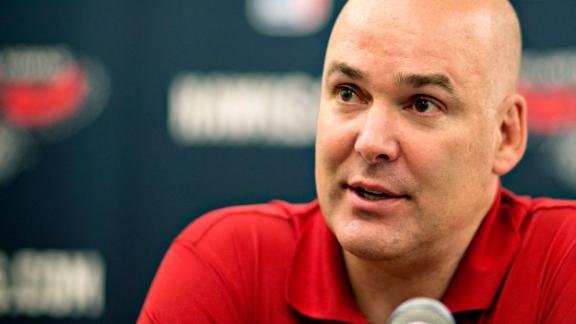 ATLANTA -- Civil rights leader and former Atlanta mayor Andrew Young on Tuesday told a local television station that Danny Ferry should be allowed to rejoin the Hawks organization in his capacity as general manager.

Ferry took a leave of absence from the Hawks on Sept. 12 after a recording of him making inflammatory comments about Luol Deng on a conference call was made public. Since Ferry's departure, Hawks coach Mike Budenholzer has presided as the head of basketball operations, with assistant general manager Wes Wilcox also active in day-to-day proceedings.

On the call, Ferry characterized Deng as a player who "has a little African in him," and added, "He's like a guy who would have a nice store out front and sell you counterfeit stuff out of the back."

Ferry said he was "repeating comments that were gathered from numerous sources during background conversations and scouting different players" and that he repeated those comments in the call during a discussion of free agents.

Ferry did not say during the call that he was reading from background player assessments that someone else wrote in a scouting report.

Young said that were he the decision-maker in the Hawks executive offices, he would've encouraged Ferry to stay on. He added that he doesn't believe Ferry is a racist.

The Hawks did not weigh in on Ferry's status on Tuesday.

Days before the recording of Ferry became public, an email written by Hawks owner Bruce Levenson in 2012 surfaced that expressed concern that the sizeable presence of African-American spectators at Hawks games was problematic for the franchise.

Levenson self-reported the email to the NBA last July and subsequently announced he would put the franchise up for sale. NBA commissioner Adam Silver said on Saturday that the process "is moving along on course."

Since the controversy, the Hawks have been one of the NBA's biggest surprises, compiling a record of 43-11 prior to the All-Star break, including a 19-game winning streak and a perfect January. They lead the Eastern Conference by 6 games over the Toronto Raptors. Four members of the Hawks' starting five were selected to last Sunday's All-Star Game.

Young has been a prominent presence in Atlanta for more than 50 years and was a close confidante of Martin Luther King Jr. In 1972, Young became the first black congressman from Georgia elected to the U.S. House of Representatives since Reconstruction. President Jimmy Carter appointed Young as the nation's Ambassador to the United Nations in 1977, after which Young was elected as Atlanta's mayor in 1981 and again in 1985.