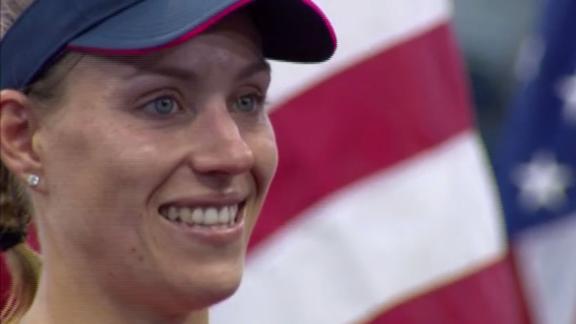 NEW YORK --Early in what would become a tight test of a U.S. Open final, Angelique Kerber sprinted forward to somehow reach a drop shot and scoop a down-the-line winner to a corner.

The Arthur Ashe Stadium crowd roared, and Kerber celebrated by raising her right hand and wagging her index finger in the air, as if to remind opponent Karolina Pliskova _ and everyone else _ "I'm No. 1!''

Yes, she is. And a two-time Grand Slam champion, too.

Kerber won her first U.S. Open title and the second major trophy of her out-of-nowhere breakthrough season, taking five of the last six games to beat a fading Pliskova 6-3, 4-6, 6-4 on Saturday.

"It means a lot to me. When I was a kid, I was always dreaming to one day be the No. 1 player in the world, to win Grand Slams,'' said Kerber, a 28-year-old German who will move up one spot from No. 2 and replace Serena Williams atop the WTA rankings on Monday. "I mean, all the dreams came true this year, and I'm just trying to enjoy every moment on court and also off court.''

Never a Grand Slam finalist before 2016, Kerber beat Williams for the Australian Open title in January, then lost to her in the Wimbledon final in July.

On Saturday, the No. 2-seeded Kerber trailed by a break at 3-1 in the third set before coming back against Pliskova, a 24-year-old Czech who was seeded 10th and hadn't been past the third round at a major until this tournament.

"For sure,'' Kerber told Pliskova during the trophy ceremony, "you have a great future.''

The present could not be brighter for the left-handed Kerber, the first woman from Germany to win the U.S. Open _ and to get to No. 1 _ since her idol and mentor, Steffi Graf.

It was Pliskova who guaranteed Kerber's ascension in the rankings by beating Williams in the semifinals, ending her record-tying 186-week stay at the top, which began in February 2013.

Kerber, who collected $3.5 million in prize money Saturday, lost to Pliskova the last time they met, just three weeks ago in the final of a hard-court tournament in Cincinnati.

But at the outset of this final, it was Kerber who was in charge. Her defense is exemplary, scrambling along the baseline to put her racket on seemingly every ball, crouching so low that her knees would come close to scraping the ground.

"I was really trying to (stay) in the moment,'' Kerber said, "trying to play my game, being aggressive.''

Kerber won the toss and elected to receive, perhaps for two reasons: Her serve is the biggest question mark in her otherwise solid game, and it made sense to force Pliskova to deal with an early test of nerves. Either way, the decision worked: Pliskova double-faulted on the match's first point and got broken right from the get-go.

There were plenty of lengthy exchanges in that first set, and Kerber tended to get the better of them, winning 9 of 14 points that lasted at least 10 strokes.

But Pliskova hung in there. And after frittering away her first four break points of the match, she converted her fifth with a lob-volley winner that curled over Kerber and alit right by the baseline. Suddenly up 4-3 in the set, Pliskova turned to her coach up in the stands and yelled, pumping her fists.

Now it was a match, filled with terrific points, tense moments and plenty of emotion. Pliskova served out the second set _ the only one dropped by Kerber all tournament _ and spiked a ball. Kerber got broken early in the third and bounced her racket off the court. Moments later, she trailed 3-1.

But this was Kerber's turn to show some mettle, breaking back to 3-all and again to end it. She dropped on her back after the last point, then climbed into the stands to begin the celebration with her coach and others.

"She really proved she's the world No. 1,'' Pliskova told the fans. Then she addressed Kerber directly, saying: "It was a great match, and I'm very honored to play with you.'' 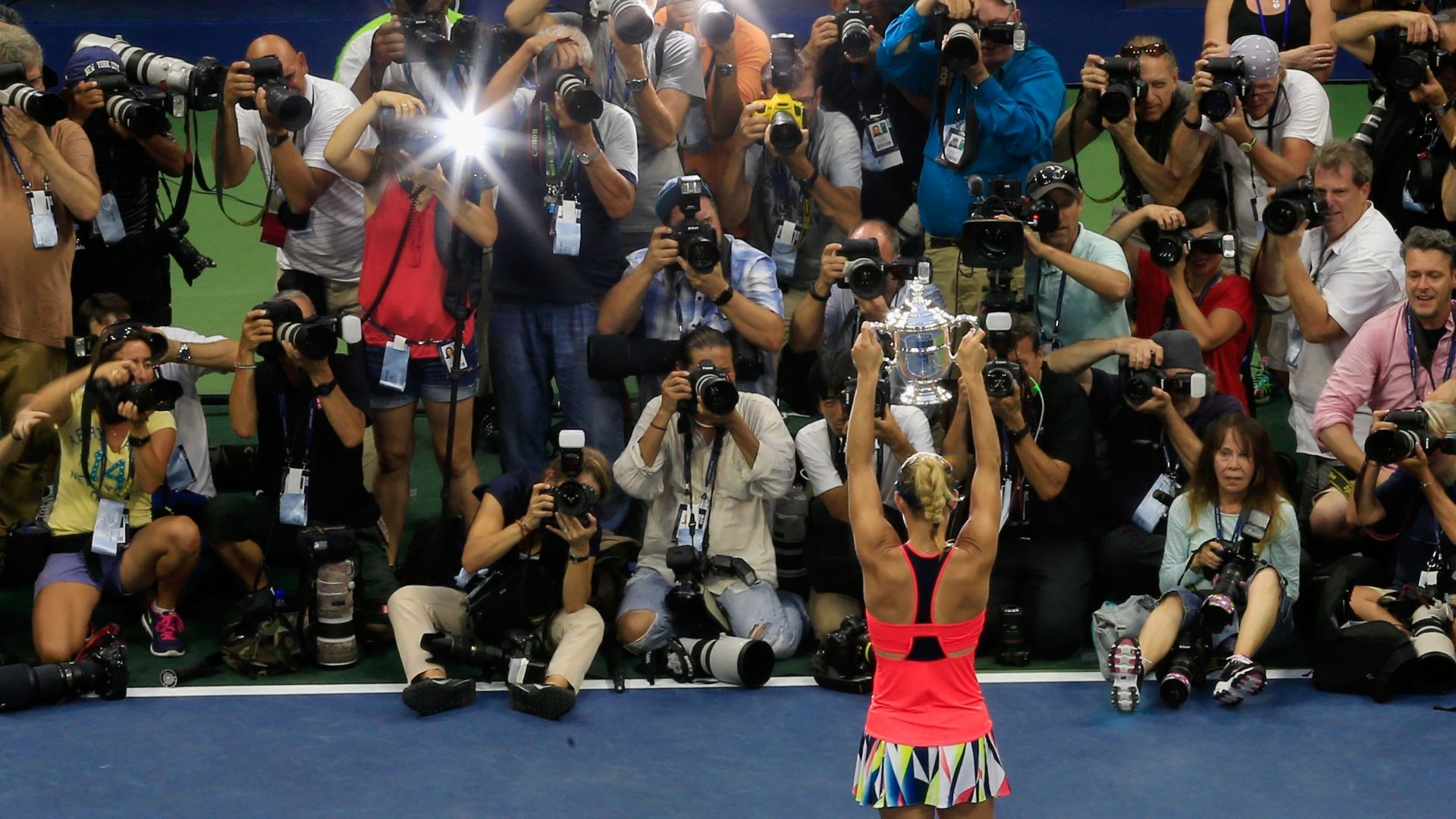 Kerber holds off Pliskova for US Open crown
Angelique Kerber defeats Karolina Pliskova 6-3, 4-6, 6-4 to win the US Open. 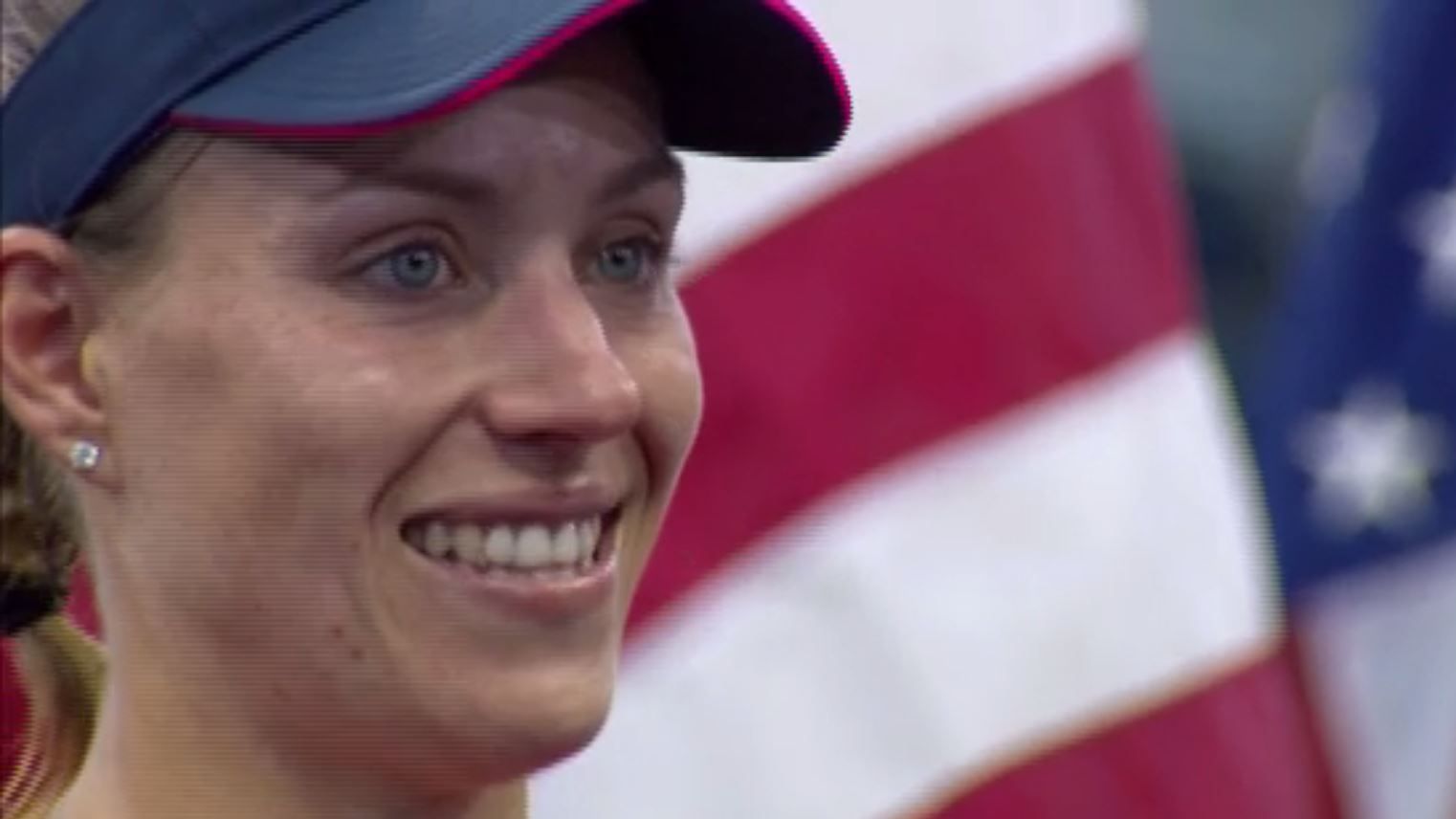