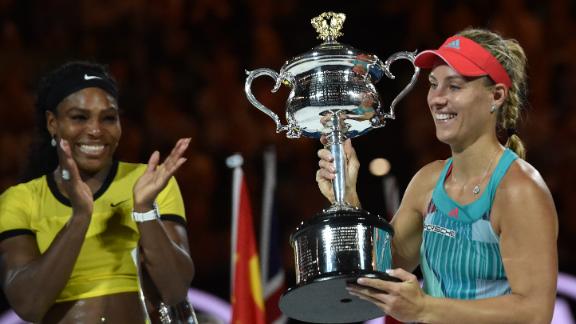 MELBOURNE, Australia -- Two weeks ago, Angelique Kerber came within one point of exiting the Australian Open in the opening round. Six matches later, she can call herself a Grand Slam champion.

The No. 7 German took advantage of a noticeably tense Serena Williams on Saturday, triumphing 6-4, 3-6, 6-4 to win her first major title and thwarting the American's bid to match Steffi Graf's record of 22 major wins.

It wasn't long ago that Kerber was toiling in mediocrity. In 2011, she lost 11 consecutive first-round matches, but her vision was clear from the beginning of this tournament -- that no matter what, she'd never let the pressure of a big moment get to her again.

Mission accomplished. Two hours, 8 minutes into a drama-filled battle, Williams overcooked a forehand volley on match point, sending Kerber sprawling to the ground in tears. Overwhelmed, Kerber sauntered to her chair and looked to the crowd, eventually making her way over to her camp.

"I got my second chance, and this is my dream come true," said Kerber, who was born five days before Graf won her first Australian Open title in 1988. "My whole life I am working really hard, and now I am here and call myself a Grand Slam champion."

She joins Graf as the only German women to win a Grand Slam title in the Open era.

Perhaps it is not as stunning as Williams' loss to unranked Roberta Vinci at last year's US Open, but for the world No. 1, the result is equally as hard to digest..

"Every time I walk in this room, everyone expects me to win every single match, every single day of my life," Williams said. "As much as I would like to be a robot, I'm not. I try to. But, you know, I do the best that I can.

"I try to win every single time I step out there, every single point, but realistically I can't do it. Maybe someone else can, but I wasn't able to do it."

With the weight of the moment appearing to get to Williams, a six-time Aussie Open winner, she was out of sorts from the start. After an exchange of breaks with Kerber early in the first set, Williams was broken for a second time when she sent a sitting forehand well long of the baseline. After that, Williams began to misfire one ball after another.

But credit to Kerber: Her sharp-angled groundstrokes took Williams well off the court, allowing the German to finish points easily when Williams wasn't mis-hitting.

Williams picked up her play in the second set, truncating her errors significantly.

In the third, the momentum and emotions were changing at a rapid pace. Kerber won the first eight of nine points before Williams broke back to make it 2-1 on serve. Soon after, Kerber ran off with seven straight points. Serving for the match at 5-3, Kerber finally succumbed to the pressure for the first time, missing a tentative forehand.

Finally, if not fittingly, at 5-4, Kerber broke Williams for the final time, and that was it.

"Well, I think I did the best I could today," Williams said. "Would I give myself an 'A'? No. But today, this is what I could produce today. Maybe tomorrow I could produce something different. But that's all I can go off."

Kerber, a relatively anonymous 28-year-old left-hander, became the first German player to win the Aussie Open since Graf did it 22 years ago. In her first match of this tournament, Kerber, who fell in the opening round here last year, had to fend off match point against Misaki Doi-- becoming the first woman in the Open era to win a Grand Slam title after saving match point in one of the first two rounds.

Kerber dropped only a single set the rest of the way.

At No. 7, Kerber became the lowest-ranked Aussie Open winner since Williams in 2007. But when the rankings come out Monday, Kerber will rise to a career high of No. 2.

For Williams, though, this will go down as another major missed opportunity.

Armed with the best serve in the women's game, Williams failed to hit a single ace in the opening set, finishing the match with just six. She also littered the court with 46 unforced errors. So composed in her first six matches, Williams lost her first major final since falling to Samantha Stosur at the 2011 US Open.

In a career that dates nearly two decades, this was lining up to be Williams' most dominant run in a major. Through six rounds, she had dropped just 26 total games, the fewest of her Grand Slam career.

Until the final, this was a stark turnaround from Williams' journey in 2015, when she found herself in one arduous battle after another, playing 12 three-setters in the four majors. Williams said that it was a testament to her perseverance, but that she'd also prefer a more seamless route.

Here, she lived up to her self-imposed edict, winning her first 12 sets. But a flat-footed Williams never found the zing on her shot Saturday.

Perhaps of little consolation now, but Williams will get another shot to match Graf at the French Open. As for the world No. 1's calendar Slam endeavor?

That will have to wait another year.