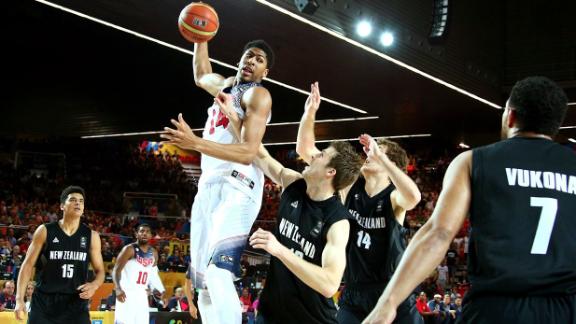 BILBAO, Spain -- American players paused from their warm-ups to stand and face their New Zealand opponents as they performed the haka, their traditional war dance challenge.

The U.S. response wasn't nearly as interesting. Just pound the ball inside and outmuscle an overmatched opponent.

Anthony Davis had 21 points and nine rebounds, Kenneth Faried added 15 and 11 boards and the U.S. remained unbeaten at the FIBA Basketball World Cup by beating winless New Zealand 98-71 on Tuesday.

James Harden scored 13 points for the Americans, who will play two more games in Bilbao before moving on to Barcelona for the round of 16. They will face the Dominican Republic on Wednesday before wrapping up Group C play on Thursday against Ukraine.

"It was a good, solid performance," U.S. coach Mike Krzyzewski said. "I thought the intensity was excellent."

Two nights after having to rally from a halftime deficit and pull away in the fourth quarter for a 98-77 victory over Turkey, the U.S. led this one wire to wire. The game was close only for a little more than a quarter.

BJ Anthony scored 11 points for New Zealand, which fell to 0-3.

"It was pretty awesome getting to play against these guys. These are guys that we watch on TV all the time," veteran forward Casey Frank said. "To be able to get out there on the court against them and have a little bit of success offensively, obviously the result didn't go our way, was pretty awesome."

The Tall Blacks' best work was before the game with their haka. Krzyzewski said U.S. players were aware it would be part of the pregame and they lined up to face midcourt as the New Zealand players got into their formation.

"We actually were going to shake hands with them afterwards because we knew that that was a really neat thing to do and it's part of their tradition, and we admire that," Krzyzewski said.

Fans enjoyed it, then were largely quiet throughout the first half as the bigger U.S. team imposed its will, not needing the kind of highlight plays that fans expect of the NBA stars.

But there was no shortage of energy from Faried, the Denver Nuggets forward who seems intent on raising his profile as a largely overlooked player in the league.

The "Manimal" came into the game shooting 14-of-17 in the tournament, then made all five shots in the first half while also grabbing six rebounds. He finished 7-of-9 from the field and is shooting 81 percent, with Krzyzewski calling him the Americans' "biggest and best surprise."

He was just as active on defense, getting called for a third-quarter goaltend on a shot he blocked with such force that it landed behind the New Zealand bench.

Stephen Curry finished with 12 points for the U.S., getting his shot to fall after going just 4-of-17 through the first two games. Golden State Warriors backcourt mate Klay Thompson also scored 12 and Kyrie Irving had 10.

It was 27-20 after one quarter, and the Americans were ahead by nine in the second before a 12-0 run, featuring seven points from Irving, made it 50-29 on Faried's follow shot with 4:14 left. The Americans got into transition during that flurry but were often content in the first half to dump it inside, taking advantage of Davis' and Faried's muscle in the middle.

Harden said the Americans are happy to ride their big men rather than the recent LeBron James-Carmelo Anthony-Kevin Durant squads that made the wing scorers like himself the feature.

"We've got 12 guys that can score the basketball at any given moment," Harden said, "and tonight and every other night the focus is defense, and whoever scores the basketball, it's USA points."

Harden had a couple of baskets early in the third quarter -- he and Davis both throwing down impressive dunks -- and the Americans kept building the lead en route to their 57th straight victory.

Derrick Rose started for Irving in the second half, with Krzyzewski saying he wanted to get the former NBA MVP more minutes with the starters as he returns from nearly two seasons out because of knee operations. Rose shot just 1-of-6, but Krzyzewski praised his performance.