Antonio Cromartie: Tom Brady should have been fined, not suspended 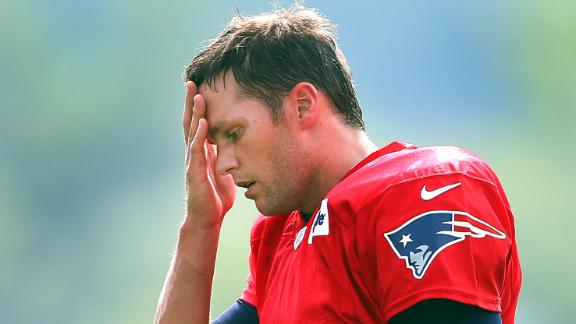 FLORHAM PARK, N.J. -- New York Jets cornerback Antonio Cromartie is no fan of Tom Brady -- he once gave a profane description of Brady in a newspaper article -- but he said the New England Patriotsquarterback is being unfairly penalized by the NFL for his role in the deflated-footballs scandal.

"Honestly, I don't think he should be suspended," said Cromartie, who appeared Thursday on ESPN's First Take from Jets training camp.

The outspoken cornerback called out Roger Goodell, criticizing the commissioner for his handling of the matter. Cromartie also said it sends a loud message to the rest of the league.

"Nobody is safe," Cromartie said. "No matter who you are, Roger is going to do what he's going to do. He's going to make his own rules as he goes. It shouldn't be like that."

Cromartie backtracked a bit, noting the NFL Players Association "gave him the freedom" to rule on player appeals.

"We signed the CBA, so it's ... we're at our own fault for doing it," Cromartie said. "We should've been more detailed. We shouldn't have rushed. We should've pushed another month and a half [in the 2011 negotiations] and made those owners lose money and go from there."

Speaking to reporters after practice, Cromartie reiterated his stance against Goodell.

"The commissioner has always had the [power to] discipline," Cromartie said. "I just feel like, at this point in time, with the discipline he put forth, he stepped outside the rules and made his own rules."

Brady's four-game suspension doesn't directly affect the Jets because they don't face the Patriots until Week 6 in Foxborough, Massachusetts. Nevertheless, it was unusual to see one of their players show support for their No. 1 nemesis.

"I want to see New England at their best, even though we don't play them until Week 6," Cromartie said. "I want them to be at full strength and not have any excuses."

Interestingly, cornerback Darrelle Revis, who played for the Patriots last season, remained neutral on whether Brady deserves the suspension. But, like many across the country, he's tired of the controversy.

"I think it's dragged a little bit too far," Revis said on First Take. "It's a little bit too much. I feel that he got the suspension of four games, and [he should] live with it. I don't know all the information; I don't know everything about the whole situation, but Tom, I know he's a competitor. I know he wants to win. It's unfortunate what's going on."

Revis revealed that Brady addressed the team after the AFC Championship Game, when accusations of deflating the footballs first surfaced.

"After that game, going into the Super Bowl, Tom spoke to the team, and it seemed like he was very hurt about what was being said about Deflategate and what was said about him, and I think he just tried to clear the air in that moment," Revis said. "And then after the Super Bowl and we won, it just blew up into a bigger issue."