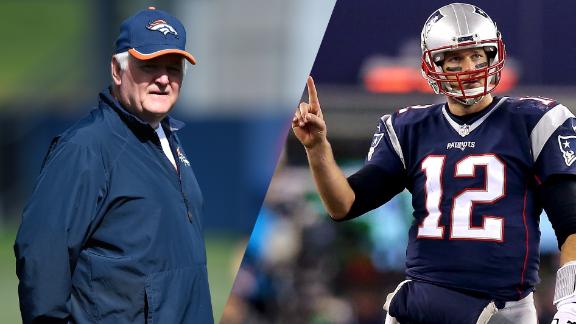 The Denver Broncos might be bringing some tissues onto the field for Sunday's AFC Championship Game.

"That would be an accurate statement. I've never seen any quarterback look to the referee right after he gets sacked more than Brady," Smith told reporters Monday, according to the Colorado Springs Gazette. "Every time he gets sacked, he looks at the ref like, 'You see him sack me? Was that supposed to happen? He did it a little hard. Please throw a 15-yard penalty on him. Get him fined.'"

"I mean, when we played him, he definitely threw some temper tantrums," Jackson said in the interview. "It's one of those things that you know. He definitely [says], 'What's going on? Why?' Definitely one of those whiners that whines, but it's a competitive game. I know I wouldn't be whining like that, but some people do. So he's definitely a whiner but he's actually a big-time player, competitor, too."

Smith wasn't all negative about Brady. He praised the veteran's competitiveness and drive -- even if there are a few tears involved.

"He's not going to rattle just because you hit him hard. I've tried over the years," Smith told the Gazette. "That's what D-linemen think: 'The harder you hit the quarterback, the better it will make it on the secondary.'

"With Brady, he's a great competitor. You know it's coming. He's going to cry about getting hit, but he's going to take the hit and keep going."

One of Brady's favorite weapons, Rob Gronkowski, was also a target of some Broncos criticism this week. Linebacker Brandon Marshall said the tight end gets away with more than he should.

"I say because he pushes off," Marshall said in an interview with "Pro Football Talk Live" on Monday. "I mean, he pushes off, and he gets away with it about 98 percent of the time."

Gronkowski caught two touchdown passes Saturday in the Patriots' AFC divisional round win over the Kansas City Chiefs. He now has eight touchdown receptions in the postseason, a record for tight ends.

Broncos defensive back Chris Harris Jr. offered his strategy on how to stop Gronkowski.

"You gotta hit him low, man," Harris told SportsCenter. "Hit him in his knees. That's the best chance you got of hitting him."

Gronkowski, in an apparent response to Harris, tweeted an off-color comment Tuesday night.

Denver retweeted Gronk's post, then later Tuesday night tweeted: "The low down on defending @Patriots TE Rob Gronkowski," with a video breaking down the challenges of defending the 6-foot-6, 265-pound Pro Bowler.