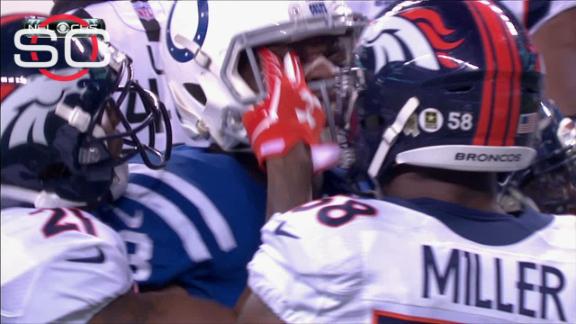 INDIANAPOLIS -- Denver Broncos cornerback Aqib Talib will almost certainly hear from the league office this week and likely will face a fine after he was penalized for poking Indianapolis Colts tight end Dwayne Allen in the eye and berating an official in the closing minutes of his team's 27-24 loss to the Colts on Sunday.

The two penalties meant the Broncos did not get the ball back to either mount a last-gasp drive or give quarterback Peyton Manning an opportunity to break the record for career passing yards. Manning threw for 281 yards Sunday and needs 3 yards to set the record.

Talib's penalties came four plays apart in the final 2 minutes, 35 seconds of the game. On the first, Talib was flagged for poking Allen in the eye following some pushing and shoving after a 2-yard run by Frank Gore.

"From my angle, I see [Allen] head-butt Von [Miller] a little bit. I went over to poke his head, and I think my hand slipped and hit his face," Talib told reporters after the game. "He acted like he got in an 18-passenger car wreck. I guess that's what type of guy he is."

Allen thought it was an intentional act by Talib.

"You're taught since little league football to play to the whistle within the boundaries of the game," Allen said. "I just felt like Aqib, who is a heckuva player, Pro Bowl player, a guy of his caliber I look up to, went outside the boundary of the game and decided to take a cheap shot.

"Out of nowhere, I saw something, and it went into my eye. First time I've ever been poked in the eye intentionally when I'm not on the bottom of the pile. Very blurry. My eye is still really sore."

Talib countered to reporters after the game:"You think I play football to poke people in the eye? It was an honest mistake."

With 28 seconds remaining in the game on a 23-yard field goal attempt by Adam Vinatieri, Talib was flagged after the kick for unsportsmanlike conduct that referee Brad Allen called "berating an official" on the stadium public address system.

"I was just clapping my hands," Talib told reporters after the game. "Everybody in the stadium was clapping their hands. I was 10 yards away from the guy, clapping my hands. He didn't like it. He threw a flag.

"A hard clap. Like there's something in the rule book for too hard of a clap. A too-hard-of-a-clap flag? That's the one I got."

The field goal was nullified, and Colts' quarterback Andrew Luck simply took a knee on the next play to end the game.

"It is what it is, we got the L," Talib said. "We were going back and forth all game. Everybody was talking."

"Both sides are talking, and you have to handle your business," Kubiak said. "So that's on me, and I've got to make sure if he's out there he's got to handle his business."

Kubiak said after the game that he didn't see what caused the second penalty on Talib but he would take a look at the game video to see what transpired.

"I thought we did a great job of keeping our composure in the second half, thought we got ourselves in a position to win," Kubiak said. "Did we do some not very smart things at the end of the game to not get the ball back? I agree with that."

Talib's second penalty was the Broncos' third unsportsmanlike conduct penalty of the season.

"As a guy who got some flags early in my career, I know he's a passionate guy who is trying to play passionately," defensive end Antonio Smithsaid.

"[Talib] knows we can't do those things," cornerback Chris Harris Jrsaid. "We know we have to keep our composure, and we usually do. Emotions run high. We were going to lose, and people were frustrated all around."

Kubiak: Talib has to keep his composure on the field
Broncos coach Gary Kubiak explains the lack of discipline shown by CB Aqib Talib and the rest of the team, as well as the Broncos' poor first-half performance, which contributed to their loss to the Colts.
Related topics:
sportsespncornerbacklast drivenfleye pokedenver broncospenaltyfineaqib talib
Copyright © 2020 ESPN Internet Ventures. All rights reserved.
More Videos
From CNN Newsource affiliates
TOP STORIES