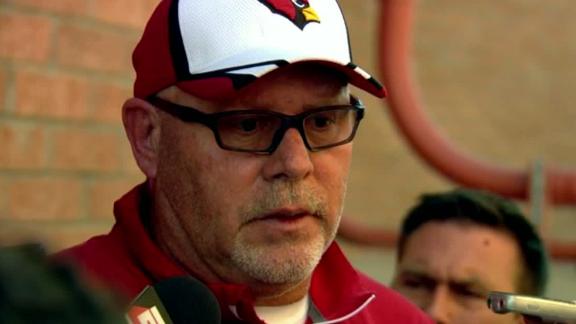 TEMPE, Ariz. -- Running back Jonathan Dwyer is not allowed to return to the Arizona Cardinals this season, and his long-term future with the team is in doubt unless he's exonerated from assault charges in a domestic violence incident involving his wife and young son, coach Bruce Arians said.

"We'll allow the court systems to take care of what is true and what isn't true," Arians said. "As far as up until then, until he's exonerated, he will not be a member of this football team.

"If and when he is exonerated, I will gladly take him back."

Arizona placed Dwyer on the reserve/non-football injury list Thursday, which means he's not allowed to return to the team for the remainder of the 2014 season. If he's released, he's free to sign with another team. Arizona will continue to pay his $730,000 base salary, which comes to $42,941 per week, according to reports. Dwyer's preliminary hearing on the charges brought Wednesday is scheduled for 11:30 a.m. ET Sept. 26.

Arians said he was "truly floored" by the allegations against Dwyer, whom he coached in Pittsburgh in 2010 and '11. He wasn't the only one. The general reaction from the Cardinals' locker room Thursday was shock. Teammates described Dwyer, 25, as "soft spoken," "a good guy," "a great teammate" and "a joy to have in the room."

"For me personally, I was totally shocked because I've known Jon a long time," Arians said. "It was totally out of character from what I've known."

Foote said he never saw any signs of a strained relationship between Dwyer and his wife. He described the Dwyers as "happy-go-lucky" and "loving," and said they always had their 18-month-old son around.

"From the outside, it looked like everything was smooth," he said.

A person with knowledge of the situation told The Associated Press on Thursday that Dwyer was undergoing mental evaluation because of mentions of suicide referred to in police documents. The person asked to remain anonymous because the team had not made the reason for the illness designation public.

Foote read about the suicidal texts Dwyer reportedly sent his wife and said they didn't fit the Dwyer he knew. Foote said Dwyer was the one person he never expected to be arrested on assault charges.

Wide receiver Larry Fitzgerald said Dwyer always had a smile on his face. He said he was caught off guard by the allegations but cautioned trying Dwyer in the court of public opinion.

"We're asking questions as if he's been tried and found guilty," Fitzgerald said. "I always thought it was you're innocent until proven guilty. So, I mean it's got a long process to deal with still. So, we got to let that play out."

Arians said Dwyer did not participate in practice Wednesday, although he was in the locker room during the team's media availability. Arians also said that when he talked to Dwyer before Dwyer was taken by police, the 25-year-old denied the allegations.

"It was like the worst nightmare a coach can have right now," Arians said.

Arians, who addressed the team with the facts early in practice Thursday, said having a player arrested at the team facility was a first for him.

Domestic violence is a cause that's close to Arians.

His wife, Christine, has been a court-appointed special advocate for children for more than 18 years, the last couple in Arizona. He has seen the impact domestic violence has on abused children.

"Finally, people have been coming aware of it and doing something about it, and it's uncalled for," he said. "I think anyone who touches a woman or a child, in my opinion, needs to go to jail for a long time.

"If this was my son, I would have a very hard time dealing with it."

Arians, 61, said domestic abuse isn't an issue that's restricted to the NFL, despite the cases throughout the league drawing the largest headlines over the past couple of weeks. It affects neighborhoods throughout the entire country, he said.

"This isn't about being under a microscope in the NFL; this is a serious problem in the nation and around the world," Arians said. "Domestic violence is something that we all have to work on.

"If this bad scar on the NFL, as you want to say, right now makes the rest of the world aware of what's going on, it's damn good."