Kliff Kingsbury to give Cardinals players cellphone breaks during practices 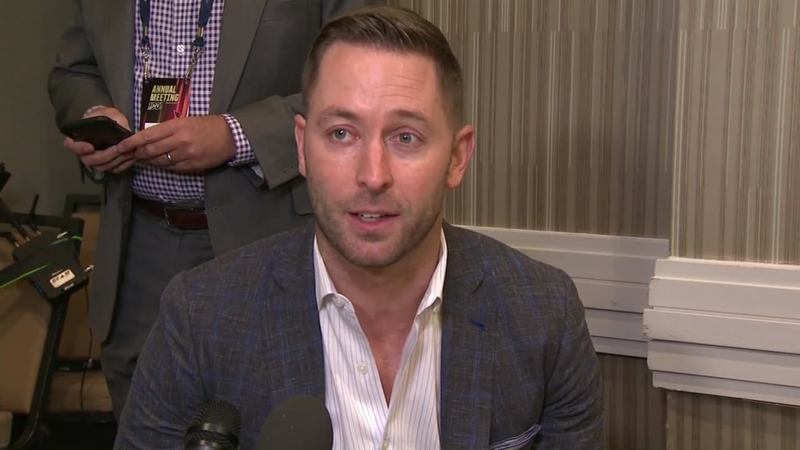 Arizona Cardinals players to get cellphone breaks during practices

PHOENIX, Ariz. -- The new coach for the Arizona Cardinals is bringing a new tact into team meetings: cellphone breaks.

During an NFL owners meeting Tuesday, Kliff Kingsbury said the players will get to use their phones every 20 or 30 minutes -- a time when the coach believes players typically start to lose focus or interest in the meeting.

The former Texas Tech coach used the same practice for the Red Raiders since 2012.

"You start to see kind of hands twitching and legs shaking, and you know they need to get that social media fix, so we'll let them hop over there and then get back in the meeting and refocus," Kingsbury said.

ESPN reports Kingsbury saw how short the young players' attention spans can be. Since the average NFL player is 25, he plans to use the technique with a few changes.

"I think coming from the college ranks to obviously, those young men, it's got to be quick hitters, 20 minutes at a time, give them a break and get them back in," he said. "We want to make sure that when we have them, they're focused, and they're locked in, and we're maximizing their time."
Report a correction or typo
Related topics:
sportsarizonanflcellphone distractionstechnologycellphonearizona cardinals
TOP STORIES
Cooper urges NC businesses to make workers mask up or get vaccinated
Detroit Pistons take Cade Cunningham first in the NBA Draft
Federal workers required to get vaccinated; military may be next
Fayetteville couple says broken wedding venue A/C was 'unbearable'
Teen bitten by what is believed to be a shark at Wrightsville Beach
Vet tech shortage could spell trouble in pet emergencies
Show More
Heat Advisory issued for central NC ahead of high temps on Friday
Johnston County school board makes masks optional for students, staff
As COVID cases increase, demand for testing also going up in Triangle
Dozens of COVID-19 cases across the US linked to NC summer camp
Fort Bragg soldier dies at underwater training school
More TOP STORIES News