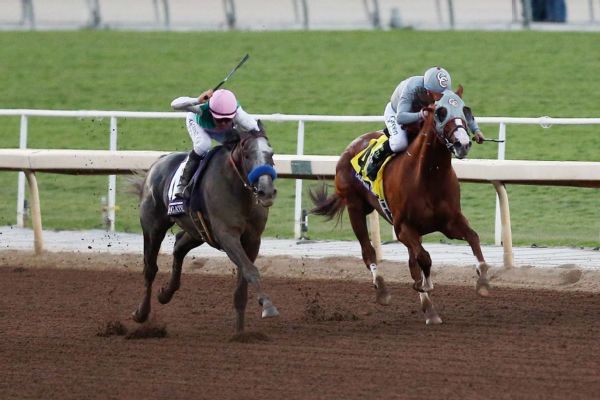 ARCADIA, Calif. -- California Chrome was cruising along on the lead, looking every inch the lauded veteran ready to polish his résumé with another big victory. Trailing behind was Arrogate, the youngest horse in the field, brilliant but inexperienced.

Arrogate chased California Chrome through the stretch, leaving the rest of the field in the dust. The highly anticipated showdown was on.

With Mike Smith first whipping Arrogate left-handed and then right, the 3-year-old colt caught California Chrome in the final 100 yards to win the $6 million Classic by a half-length on Saturday at Santa Anita.

The victory elevated Arrogate to heir apparent to California Chrome, who at age 5 likely has one race left in his storybook career.

For Arrogate, the future is limitless. His potential is untapped, having not competed as a 2-year-old and making just his sixth start in North America's richest race.

It was California Chrome's first loss in seven starts this year; Arrogate won his fifth straight.

"I was surprised I beat him," Arrogate trainer Bob Baffert said. "I didn't think I could beat him going in."

Smith earned his third Cup victory of the weekend and leading 25th of his career. Baffert won his record third consecutive Classic in front of an announced crowd of 72,811, the third highest in the event's 33-year history.

California Chrome set an unchallenged pace, with Melatonin second and Arrogate loping along on the outside in third down the backside.

"I was cruising on the lead. He was doing it so easy, so comfortable," California Chrome jockey Victor Espinoza said. "Maybe I should have opened it up a little bit early."

Around the final turn, Arrogate cut inside of Melatonin and shifted to the outside, taking dead aim on California Chrome, the 2014 Horse of the Year who won the Kentucky Derby and Preakness that year.

"Once I switched over and dropped into the far turn, he really picked it up at that point," Smith said. "Then he was relentless, this horse. He never stops. He's got some stamina."

California Chrome still had an advantage in the upper stretch, until Arrogate closed steadily to pull off the upset.

"You saw two champions run,'' said Art Sherman, California Chrome's 79-year-old trainer. "What can I say? We got outrun on the fair. No excuses. He ran his eyeballs out."

Late-developing Arrogate first gained notice in August at Saratoga, winning the Travers by 13 lengths with the fastest time in the track's 147-year history.

Then he proved in the Classic that he's not a one-race wonder.

"This horse is just learning how to run. California Chrome is a champion," Baffert said. "To run down California Chrome, that's what the Breeders' Cup is all about, watching races like that."

The two-day attendance total of 118,484 was the highest in the 33-year history of the Breeders' Cup.