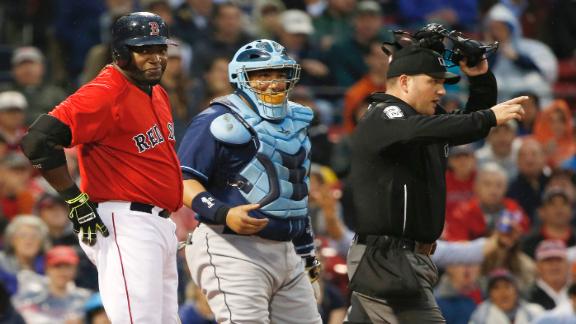 CLEVELAND -- David Ortiz, who was hit in the back by a David Price fastball Friday, was irate that the Rays left-hander evidently is escaping unpunished while Red Sox starter Brandon Workman, who later threw a pitch behind Evan Longoria and was promptly ejected, was fined and suspended on Tuesday for six games by Major League Baseball.

"We're the ones getting fines and suspensions," Ortiz said. "I guess the rules aren't for everyone.

"I don't think what they're doing is fair. I think the rules should be for everybody. We didn't start this up. I didn't hit nobody. Workman didn't hit anybody in the first inning. [Price] did."

Ortiz noted how plate umpire Dan Bellino issued a warning to Price and both teams immediately after Ortiz was hit by the pitch in the bottom of the first, which demonstrated, Ortiz said, that the umpires had determined intent on Price's part.

"I thought the rule was for everybody," Ortiz said. "I thought that the minute you figure someone hit someone on purpose -- the rule says it right there -- you're going to follow up with it. In this case, it seems they ain't.

Asked if he understood what Workman did, Ortiz said: "He was supposed to back up his teammate. That's what he did, you know. And I mean, I don't want to see anyone getting hit or getting hurt, you know what I'm saying?

"And to be honest with you, nobody planned on Workman going out there and hitting Longoria, [who] he missed. But at least he sent a message: If you hit my players, I hit yours."

Workman will appeal his suspension and make his scheduled start Wednesday at Cleveland.

Asked how the umpires and MLB could have determined that Workman was acting with intent while exonerating Price, Red Sox manager Farrell said, "I can't answer that. Dan Bellino is going to glean his own impressions of what was unfolding in front of him. That's a question better directed to him."

Farrell appeared disinclined to say more pending the appeal, in which the Red Sox are hoping that Workman receives a reduced sentence, which would keep him from missing a start.

"In regard to the suspension of Workman, that is not my responsibility to make that judgment," Maddon told reporters in Miami. "Apparently they saw something in the video that indicated that they needed to act in the manner that they did."

Told that MLB said in its statement that the suspension was for throwing at Longoria's head, Maddon said, "So that's what was ascertained from the video, thus I think that's appropriate."

Ortiz said that as Friday's game went on, he became convinced that Price had thrown at him intentionally because Ortiz had homered twice off him in Game 2 of the American League Division Series in October.

"That's why I was so angry after the game," Ortiz said.

Ortiz said Price called him immediately after that game. "I wasn't the one who called him," Ortiz said. "He called me."

Asked if Price had objected specifically to Ortiz lingering at home plate to watch his second home run, a drive down the right-field line, he said: "I guess."

"He tried to make that point, what I understand at the time, that he gave it up, [but] he's not a loser; he's a guy who likes competition," Ortiz said. "I made my point clear: 'Hey dude, you're not going to win every day all the time. I know you want to take your team to the playoffs.'

"I [talked] good. Because of that, he called me back later ... and apologized. If I had gotten angry like him, then things would have been different. Basically he punked me because of what he did. I thought it was a word between man and man. To come back and do what he did [Friday night], I think it was some punk ass s---.

"I'm not going to get hit again," Ortiz continued. "Not by him. He did it on purpose. He punked me, and that's very disrespectful. I'm a grown-ass man. I've been around the league a long time, and I know how to take care of business on my own."

Regarding Ortiz and his comments, Maddon said, "Papi and I have had a pretty good relationship in the past. Sometimes commentary kind of oversteps, over-reaches. I'd like to believe if he had a better chance or more of an opportunity to think about it, he'd respond differently.

"For me, for us, it's a moot point, it's a dead issue right now. I want us to continue to move it along and just play baseball.

"It's unfortunate that it evolved into this war of words as it's gotten to this point, although I've been subject to that in the past so I understand how that works. I would like it to just go away and let's just start playing some baseball."

Maddon said he has not been asked to speak with MLB about the incident and that he sees no reason for Price to be suspended. "He wasn't even kicked out of the game," Maddon said.

Price also said he hasn't been asked to talk to MLB and that he "absolutely" should not be suspended.

Asked his reaction to Ortiz saying Price should be suspended, Price told a pool reporter, "I've got nothing else for you, to be honest. I'm past it. I have nothing else to say. People are going to have enough to say. I'm over it."