Auriemma reported for call to Mo'ne 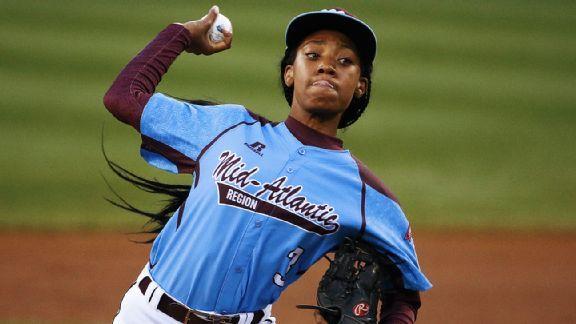 Mo'ne Davis was the biggest star of the Little League World Series last month, but the ace of the Philadelphia team never kept it a secret that she'd rather be on the basketball court than on the baseball diamond.

The Connecticut Huskies' basketball court, to be exact.

But according to the Hartford Courant, one of the Huskies' rivals took exception when women's coach Geno Auriemma called Davis to congratulate her, and that school reported it to the American Athletic Conference as a potential recruiting violation.

"That's the world that we live in," Auriemma told the Courant.

The objecting school has not been identified, but the Courant reported that Connecticut does not believe it was a violation because Davis, an eighth-grader, is not yet a prospective student-athlete.

The NCAA defines a prospective student-athlete as "a student who has started classes for the ninth grade."

Davis, 13, helped lead Taney to the American semifinals in Williamsport, and she gained national attention for her pitching and poise.

"I have no idea if the kid is very good, kind of good, not good at all or a superstar or can even reach the basket," Auriemma told the Courant. "How is that a violation?"