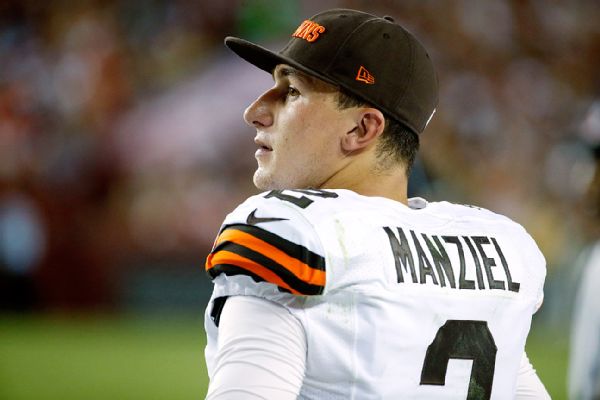 Former Cleveland Browns and Texas A&Mquarterback Johnny Manziel is being sued by a bar employee who says his nose was broken when Manziel punched him.

The lawsuit, filed Monday by Eric Newton in Travis County, Texas, seeks up to $1 million in damages for the incident, which allegedly occurred Sept. 6 at an Austin bar where Manziel was attending a private party.

The lawsuit was first reported by the Facebook page Texas Our Texas.

Newton claims in the suit that Manziel wanted Newton to make drinks, but Newton told him his role as a bartending assistant did not permit him to do so.

The suit goes on to say that Newton later had a conversation with a customer about Manziel that was overheard by someone in Manziel's group, who then told Manziel about the exchange.

Manziel allegedly went after Newton, cursing at him and punching him in the face, according to the suit, with the two falling to the floor before Manziel got up and ran out a back exit of the club.

The Austin Police Department says it is investigating this incident.

Austin police wouldn't release details of an incident report, saying it had been marked "private'' by an investigator.

A spokeswoman for Manziel said his representatives were aware of the lawsuit but didn't comment further.

Manziel is scheduled to appear in a Dallas court on Thursday for a hearing on the possible dismissal of a domestic assault charge involving his former girlfriend.

Manziel was accused of hitting and threatening former girlfriend Colleen Crowley during a night out in January. Earlier this month it was announced that prosecutors reached a tentative deal to dismiss the misdemeanor charge, which carries a penalty of up to a year in jail and a $4,000 fine.