Barrett: Cardale Jones can do it all 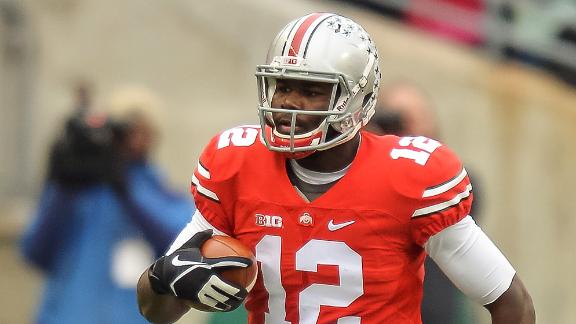 COLUMBUS, Ohio -- If the roles had been reversed coming out of training camp, maybe the Heisman Trophy campaign at Ohio State would have featured Cardale Jones instead of J.T. Barrett.

At least that's what the redshirt freshman believes as he passes the torch to Jones following his season-ending broken ankle suffered in Saturday's win over Michigan.

"Cardale is a great player," Barrett said Wednesday. "I honestly feel like if I wasn't starting this year, Cardale would have done the same things I did this year. Cardale is that talented. He definitely can do it."

The No. 5 Buckeyes will need Jones to follow in the same path Barrett blazed as the backup to an award-winning quarterback, though Jones has less time to prepare for Saturday's Big Ten title game against No. 13 Wisconsin than Barrett did after Braxton Miller was lost for the year 10 days before the season opened.

Leading up to Miller's injury, Barrett had been locked in a battle with Jones over what was expected to be the backup job for the Buckeyes behind the two-time defending Big Ten Offensive Player of the Year. In fact, Jones had left spring practice with that role and was in line to take over the spread offense before Barrett emerged and wound up breaking the league's record for total touchdowns with 45 as a first-year starter.

Barrett did have a few early struggles, most notably in a Week 2 loss to Virginia Tech. And like Barrett entering the season, Jones has never started a game for the Buckeyes as he gears up for the best defense in the Big Ten.

But if Jones needs some helpful advice, Barrett has been in the same position pretty recently and thrived, and he is more than willing to provide a sounding board for his teammate leading into the weekend and on game day in Indianapolis.

"Don't try to do it all yourself," Barrett said. "We've got a great offensive line; they've gotten better since Week 2. The offense as a whole, we've just gotten better offensively from Week 2. He doesn't have to do it all by himself. We've got a great group of receivers ... and we can hand it off to the running backs, so you don't have to win the game.

"Probably a couple years ago, Braxton was in a tough position and didn't have as many athletes or people with experience, and he had to do a lot of it by himself. Whereas with myself and Cardale, we've got people around us where we can hand the ball off, throw it around. We don't have to win the game. He just has to go out and play his game."

How the highest-scoring offense in the Big Ten might be tweaked to take advantage of what Jones brings to the game remains to be seen, but the Buckeyes have already proved capable of making adjustments and succeeding with a new quarterback.

Thanks to Barrett's accuracy and quick decision-making skills, Ohio State emphasized its passing attack a bit more after it lost Miller's incomparable athleticism as a rusher. Jones isn't known for his pinpoint passing, but he has a much stronger arm than Barrett and brings a physical presence to the ground game with his size (6-foot-5, 250 pounds).

And there is certainly no shortage of confidence in his ability.

"He can do a lot of crazy things with his body," Barrett said. "He can sling the ball the whole football field and throw it 100 miles an hour, but he doesn't have to win it by himself.

"I'm very confident. I was learning on the fly, and it was fast for myself. But his is going to have to be even faster, as far as learning and catching up to game reps and what they're like. But there's not a lack of confidence at all."