Beckman no longer a volunteer with UNC football staff 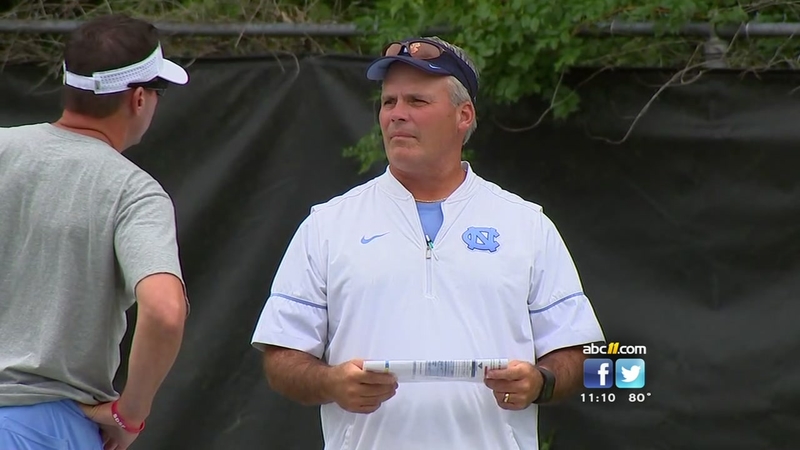 Tar Heels move to distance themselves from Tim Beckman

CHAPEL HILL (WTVD) -- One day after UNC head football coach Larry Fedora spoke to the media and defended the addition of Tim Beckman as a volunteer coach, the school announced that Beckman will no longer be part of the Tar Heels staff in any capacity.

UNC Chancellor Carol L. Folt said she was "surprised and disappointed" to learn just a day earlier that Fedora had invited Beckman to work with the team.

In a statement released by the university, Beckman, the former head coach at Illinois who was fired following an investigation into the mistreatment of players, wrote:

"I appreciate the opportunity Coach Fedora gave me to stay connected to the sport and be around one of the best staffs in the country. His willingness to help a friend was a benefit both personally and professionally. I do not wish to be a further distraction to the team or University and I will no longer serve as a volunteer at UNC. I wish Larry and the program nothing but success going forward."

Beckman was fired by the Fighting Illini on Aug. 28, 2015 following a school investigation that concluded that the coach influenced medical decisions and pressured players to play hurt. In April, Beckman settled a wrongful termination lawsuit against the school for $250,000.

"Tim will no longer serve as a volunteer with our program," Fedora said. "I brought Tim here to help a friend gain experience from our staff, but after meeting with him today, we agreed his presence had become too much of a distraction."

Beckman has working history with Tar Heels coach Larry Fedora, as they were both assistant coaches on Oklahoma State's staff in 2007.

"We made the decision today to part ways with Tim Beckman and thank him for his contributions in the short time he volunteered with our football program," said Carolina Director of Athletics Bubba Cummingham. "Coach Fedora's interest was in helping a coaching colleague get back on his feet. We will learn from this and continue preparing for the season."

Beckman went 12-25 in three years as Illinois' coach, and just 4-20 in Big Ten play. The Illini made a bowl game in Beckman's final season, losing to Louisiana Tech in the Zaxby's Heart of Dallas Bowl.