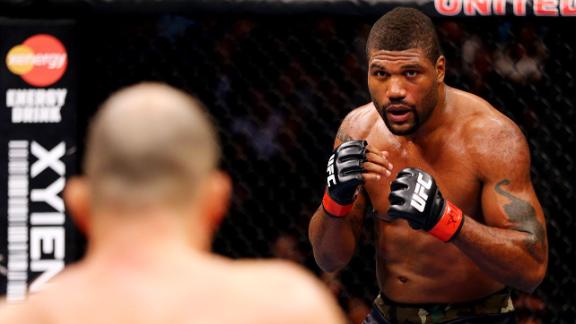 Promotion officials said the company filed suit in New Jersey court Monday. The lawsuit states that Jackson is still under terms of an exclusive Bellator contract he signed in 2013.

"Today, Bellator was compelled to go to court to stop Jackson from fighting in an April 25 bout, promoted by Bellator's competitor, UFC," the company said. "Jackson, who has completed only three fights of his exclusive six-fight contract with Bellator, is barred by contract from fighting for any other promoter.

"Our lawsuit for an injunction and related relief -- filed in the Chancery Division of the Superior Court in Burlington County, New Jersey -- will compel Jackson to honor his contractual agreement. We look forward to having one of our MMA stars fighting for Bellator again."

Jackson (35-11) is scheduled to fight Fabio Maldonado in a 205-pound contest at Bell Centre.

Jackson fought three times under the Bellator banner between November 2013 and May 2014, going 3-0. A former UFC light heavyweight champion, Jackson announced he had split with Bellator in December and re-signed with his former promotion.

The 36-year-old said he exercised a clause in his Bellator contract that allowed him to terminate the deal if breaches were made. Jackson said he provided a 45-day period to resolve the issues, per details of the clause, but the two sides were unable to do so.

Jackson originally was expected to fight Tito Ortiz, another former UFC champion, in his Bellator debut in late 2013. That bout was scheduled to air on a pay-per-view platform but fell through when Ortiz withdrew due to injury. At that time, Jackson entered the promotion's now-defunct tournament format.

He eventually did receive the opportunity to fight on pay-per-view, defeating Muhammed Lawal via unanimous decision in May. Former Bellator CEO Bjorn Rebney parted ways with the company the following month and was replaced by former Strikeforce CEO Scott Coker.

The company has not announced any plans for a future pay-per-view. In addition to the absence of a pay-per-view platform in the near-future, Jackson stated his Bellator contract called for lucrative entertainment opportunities the promotion did not ultimately provide.

The UFC has declined public commented on the lawsuit.