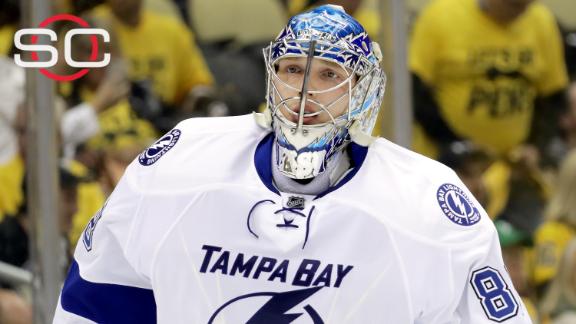 PITTSBURGH -- Tampa Bay Lightninggoalie Ben Bishophad to be stretchered off the ice during Game 1 of the Eastern Conference finals against the Penguinson Friday night because of a left leg injury.

"Injuries are part of the game, and you never want it to happen to anybody on either team," said Cooper, who offered no indication on whether Bishop will be available for Game 2 on Monday night in Pittsburgh. "You don't want to see things like that, but he went in and we got him checked out. He had X-rays done, and everything came back negative. So we're hoping for the best."

With 7:35 left in a scoreless first, Bishop, a finalist for the Vezina Trophy as the league's top goaltender, was scrambling around the Tampa Bay net during a Pittsburgh forecheck and seemed to hurt himself as he fell to the ice. The 6-foot-7 goalie immediately grabbed at his left knee.

It did not appear from replays that anyone made contact with him.

Trainers attended to Bishop, and even though he sat up, they called for a stretcher and he was taken from the ice. The 29-year-old was replaced by 21-year-old backup Andrei Vasilevskiy, who closed out the winby making 25 saves.

"Everyone knows he's probably the best puck-moving goalie out there. One of the best puck-stoppers, as well," Lightning defenseman Victor Hedmansaid of Bishop."He had a Vezina type of season. I think there's not a team in the world that would miss a player like that.

"When bad things like that happen, we know we have [Vasilevskiy] backing him up. You can't say enough about how he played. He was calm back there. He made some great saves for us.

"We're very proud of him and the way the team responded. We obviously thought about Bish the whole time. He's the guy who brought us here. We want to make this one for him."

The Lightning briefly lost center Tyler Johnsonlate in the first period after he suffered an apparent injury to his lower body when he was hit into the boards by Pittsburgh's Chris Kunitz. Johnson had to be helped off the ice but returned in the second period.

"Obviously the refs thought there was nothing wrong with it," Cooper said of the hit. "There's hitting in this game. When there's -- he kind of was in a little bit of a vulnerable spot. The player went after him hard, really hard, and kind of caught him in a tough spot."

Earlier in the first period, Tampa Bay forward Ryan Callahan was given a five-minute major penalty for driving Pittsburgh defenseman Kris Letang headfirst into the boards.

Letang left the ice but returned to the bench during the injury timeout when Bishop was being attended to. Callahan remained in the game but is likely to face supplemental discipline from the league's Department of Player Safety.

"I'm trying to pin him,'' Callahan said. "Unfortunately, in that split second I can't make a decision. The position he was in made it worse than it was. That's not the way I play.''

Information from ESPN staff writer Joe McDonald was used in this report.

Pair of 21-year-olds now the focus in goal
While Andrei Vasilevskiy got Stanley Cup playoff experience last season, Barry Melrose thinks it will be a wash now that he'll have to carry the Lightning against another 21-year old in the Penguins' Matt Murray.