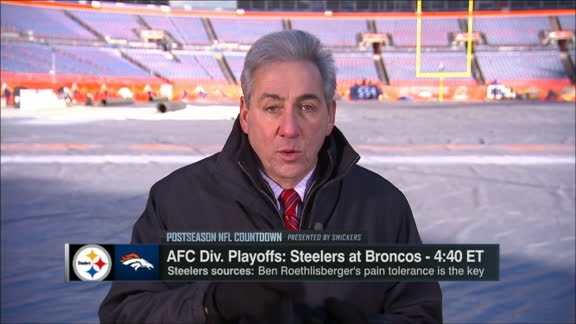 DENVER -- Ben Roethlisberger is set to start for the Pittsburgh Steelers despite his injured right (throwing) shoulder.

The Steelers and Denver Broncos kick off their AFC divisional playoff game at 4:40 p.m. ET.

Roethlisberger and Landry Jones are the active quarterbacks for Pittsburgh, which lists third-stringer Mike Vick on the inactives list along with running back DeAngelo Williams and Antonio Brown.

A source said the Steelers were pleased enough with Roethlisberger's throwing session on Friday that he became less of a question mark, knowing he had two more days to rest up and get his sprained AC joint feeling better.

Roethlisberger left the AFC wild-card game with Cincinnati late in the third quarter after linebacker Vontaze Burfict landed on top of him after a sack. Burfict's body weight slammed Roethlisberger's right side into the Paul Brown Stadium turf. He missed three series but returned in the final two minutes to throw eight passes on a game-winning field goal drive.

Roethlisberger was a limited participant in practices during the week, not throwing a football until Friday afternoon. The Steelers got Jones ready all week as insurance.

With Brown out, Roethlisberger will need a lift from his receiving corps, led by Markus Wheaton and Martavis Bryant.

"This is a group that has shown they are pretty mentally tough," offensive coordinator Todd Haley said during the week. "They prepare the same way every week. You never know what is going to happen. That is how they are preparing."