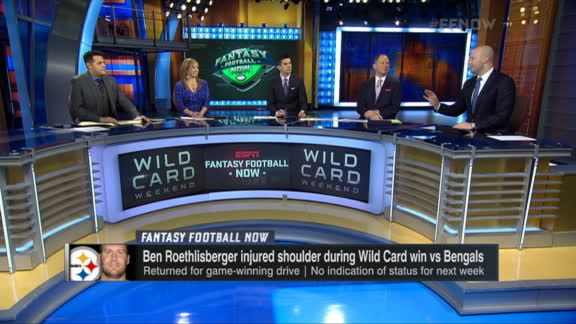 The Pittsburgh Steelers hold optimism that quarterbackBen Roethlisberger can play through what the team initially believed was a sprained AC joint in his right shoulder, a source told ESPN.

Roethlisberger told reporters Sunday that his shoulder was "sore" and termed himself day-to-day ahead of next Sunday's playoff game against the Denver Broncos.

Speaking briefly to reporters as he walked through the locker room, Roethlisberger said he had an MRI on Sunday but did not know the extent of his injury and won't know more until he meets with doctors later this week.A light practice workload to start the week is expected.

The NFL Network first reported an AC sprain for Roethlisberger.

The next seven days will determine how effective he can be against Denver -- particularly how well he can come over the top on his throws.

Roethlisberger said he was in "a lot" of pain on the Steelers' final drive Saturday night. He told coaches he couldn't take any deep shots to the end zone, having trouble passing farther than 10 yards.

He was hurt on a sack by Cincinnati Bengals linebacker Vontaze Burfict in the closing seconds of the third quarter but re-entered the game with 1:23 remaining in the fourth, after a Bengals fumble. The Steelers proceeded to go on a nine-play, 74-yard drive -- one helped by two 15-yard penalties on Cincinnati -- that was capped by a Chris Boswell 35-yard field goal to win the game.

The Steelers felt fortunate that Roethlisberger didn't fracture his collarbone from the weight of Burfict on top of him.Roethlisberger received a painkiller in order to return to the game, according to a source.

Teammates were impressed with Roethlisberger's toughness.

"You've got to salute the man," guard Ramon Foster said Saturday night. "He's a guy that's proven to be a winner."

Roethlisberger has been injured multiple times this season, missing four games with a sprained MCL and missing a week of practice with a bone bruise on his foot.