Ben Roethlisberger: 'Not who we are' to seek injury payback 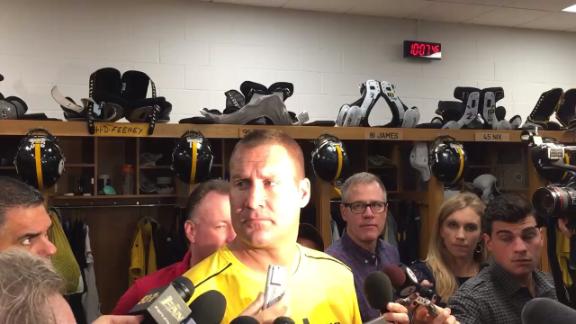 PITTSBURGH -- The Pittsburgh Steelers are working to avoid giving the Cincinnati Bengals additional motivation before their Week 2 matchup on Sunday.

On Wednesday, quarterback Ben Roethlisberger said the Steelers won't be looking for payback despite the Bengals' role in the injuries of Pittsburgh's top-three playmakers last season. Bengals Linebacker Vontaze Burfict, who is suspended for three games for a continued pattern of egregious play, pulled down Steelers running back Le'Veon Bell on the play that ended his season with a knee injury, and he put big hits on Roethlisberger and receiver Antonio Brown in the Bengals' AFC wild-card loss.

Roethlisberger wouldn't bite on the evolution of the Steelers-Bengals matchup, which featured more than $100,000 in player fines, pregame scuffles, social media sparring and player-to-coach beefing.

"Whether it's the Browns, the Bengals or Ravens, to us they are all big division rivals," Roethlisberger said.

The closest thing to a scintillating quote in the Steelers' locker room on Wednesday came from defensive end Cam Heyward, who called Steelers-Bengals "the second-biggest rivalry in the AFC North." Many Steelers still consider the Ravens, armed with two Super Bowls, their primary rival.

The Bengals and Steelers create physical matchups, but the two are still developing a history, Heyward said.

Asked about the animosity between both teams, Heyward said: "What animosity? We got the win last year. At the end of the day, that's all we're trying to do."

In similar fashion, the Bengals have stayed mostly tight-lipped about Pittsburgh. Cornerback Adam Jones, whose scuffle with Steelers assistant Joey Porter earned the Bengals a costly 15-yard penalty in the final seconds of the playoff game, has declined comment about Pittsburgh.

Roethlisberger expressed respect for the Bengals, calling their defense "very, very good" and Burfict a "great player." Burfict dislocated Roethlisberger's shoulder on a playoff sack, and when Roethlisberger returned to the lineup for the game's final drive, Burfict disrupted his passing attempt to Brown with a vicious helmet-to-helmet shot on the star receiver. Brown suffered a concussion and missed the Steelers' divisional playoff loss to the Broncos.

"One of the best defenses in the league," Roethlisberger said.