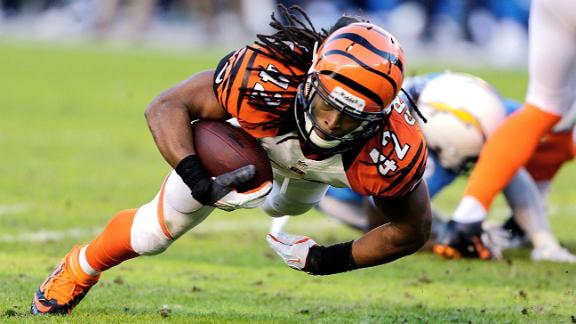 The move had been expected since the Bengals selected Jeremy Hill in the second round of the NFL draft in May. Coaches contended then that drafting Hill was not an indictment on Green-Ellis and that they hoped the rookie from LSU could compete behind starting second-year back Giovani Bernard.

"It's very difficult to release such a fine player and person as BenJarvus," coach Marvin Lewis said. "He has been an exceptional player and teammate, as well as mentor to our younger players. He has also been a standout person in the community. We thank Bennie for all he has done and wish him the best of luck in the future."

Green-Ellis had not practiced the past two weeks for what Lewis said was a stomach virus that had been spreading around the team. Green-Ellis didn't dress for the Bengals' last two preseason games, including Thursday night's 35-7 win over Indianapolis.

Hill rushed 20 times for 90 yards as he shouldered the load in the victory.

Green-Ellis rushed for more than 1,700 yards in two seasons with the Bengals, but he averaged a career-low 3.4 yards per carry last season and had just four catches.

Green-Ellis was entering the final year of his three-year contract and was scheduled to make $2.3 million this season.