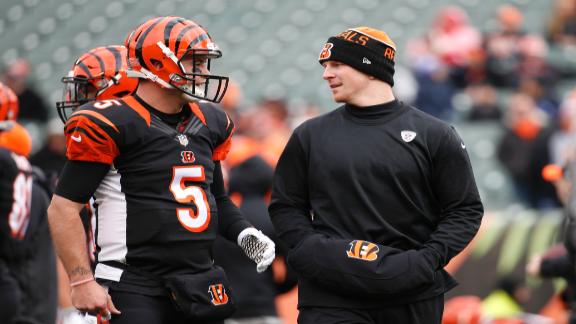 CINCINNATI -- The Cincinnati Bengals have officially ruled quarterback Andy Dalton out for Saturday night's wild-card round playoff game against the Pittsburgh Steelers.

As a result, the keys to the Bengals' offense will remain in backupAJ McCarron's hands for at least another week.

Friday's announcement didn't come as much of a surprise, considering Dalton didn't participate at all in this week's practices. He did go through his share of conditioning exercises on the side and was a fill-in defensive back during a few scout-team plays during the Bengals' low-speed walkthrough Thursday.

Early in the week coach Marvin Lewis said his team was preparing as though McCarron would be making the first playoff start of his career. McCarron started the last three games of the regular season with Dalton out nursing a broken right thumb, which he suffered in the Bengals' Dec. 13 home loss to the Steelers. Dalton broke his thumb when he was attempting a tackle after throwing a first-quarter interception near Pittsburgh's goal line.

Lewis has said Dalton's rehab is going well. The quarterback took a positive step Monday when the cast around his right hand was removed. During the open portion of this week's Tuesday practice, Dalton messed with reporters by inserting himself into the offense for two plays during the walkthrough-speed workout. He handed the ball off once and then threw a pass -- with his left hand.

McCarron has passed for 832 yards and six touchdowns filling in for Dalton. He has not thrown an interception in any of his three starts, in which the Bengals have gone 2-1.

If the Bengals win, he will be the first NFL quarterback since 1979 to win a playoff game after having three or fewer previous starts.

Savage: McCarron more than a game manager
Phil Savage reacts to the news that Bengals have officially ruled QB Andy Dalton out for Saturday's wild-card matchup with the Steelers and discusses what AJ McCarron brings to the team.