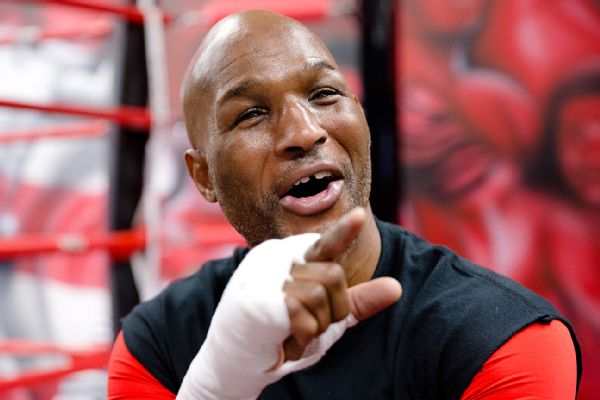 Bernard Hopkins began his career 28 years ago after a 4-year stint in prison for armed robbery and eventually rose to the top. He stayed out of trouble and became a legend and one of the most respected fighters in boxing history.

Now, at age 51, Hopkins will close out his career with a farewell fight against light heavyweight contender Joe Smith on Dec. 17 at The Forum in Inglewood, California, Golden Boy Promotions CEO Oscar De La Hoya told ESPN on Monday.

Hopkins, the former undisputed middleweight and light heavyweight world champion, will turn 52 on Jan. 15 and is a surefire first-ballot Hall of Famer, but he wanted one more fight before calling it a career. He will face Smith in a scheduled 12-round light heavyweight bout that will headline an HBO-televised card.

Originally, the card was going to be topped by an expected slugfest between all-action former junior lightweight world titleholders Orlando Salido (43-13-4, 30 KOs), of Mexico, and Japan's Takashi Miura (30-3-2, 23 KOs). When Hopkins' farewell fight began being discussed for the card, Salido-Miura was going to be switched to the co-feature. However, now that fight is off because Salido injured his back last week, De La Hoya said. There will still be at least one other televised bout, according to De La Hoya and the network, but it has not been determined yet.

Hopkins (55-7-2, 32 KOs), the Philadelphia great, turned pro in 1988 but has not fought since getting knocked down in the first round and losing a shutout decision to Sergey Kovalev in a light heavyweight title unification fight in November 2014 at Boardwalk Hall in Atlantic City, New Jersey.

Hopkins will head to the other side of the country to finish his career at The Forum, a building filled with boxing history, including being the site where De La Hoya, Hopkins' close friend and business partner, made his professional debut in 1992.

"We want to make this Bernard Hopkins' retirement party," De La Hoya said. "It will be a whole week of festivities and celebration of his great career. We're going to put something together that will complement his farewell fight.

"Bernard has had many of his biggest fights on the East Coast, but The Forum is a great venue and the fact that it's where I started and where my partner is finishing makes it a great story."

Hopkins said he has retired his self-given nickname of "The Alien" -- because to fight so well at his age is not human -- and is returning to his original nickname of "The Executioner" for his career finale.

"While 'The Alien' may be retired, 'The Executioner' has one fight left, and Joe Smith Jr., is going to find out the hard way how well prepared I am for my final fight," Hopkins said. "A lot of people will focus on my age, the history of my run in the sport, the titles, etc., but I'm focused on one thing -- knocking Joe Smith out."

Although Hopkins would have liked to fight for a world title, at light heavyweight or super middleweight, those opponents were not available, so he opted to face Smith (22-1, 18 KOs), 27, from New York's Long Island. A construction worker by trade, Smith was a virtual unknown when he met contender Andrzej Fonfara on June 18 on NBC in prime time and scored a massive upset, knocking him out in the first round. The victory put him on the map and piqued Hopkins' interest.

"Joe Smith is a big knockout puncher, and he is coming off a great win over Fonfara, who had knocked out [Julio Cesar] Chavez Jr.," De La Hoya said. "He will bring the fight to Hopkins. He is aggressive. It's a legitimate fight."

Said Smith, who was born the year after Hopkins turned pro, "I'm very excited about fighting on HBO. I know now all my hard work and dedication has paid off. I am looking forward to retiring a boxing legend."

Star Boxing promoter Joe DeGuardia, who promotes Smith, said he and Golden Boy made the deal quickly. They began discussing it only about a week ago.

"We've worked together in the past with Golden Boy and HBO, and we were able to put this together nice and smoothly," DeGuardia said. "It's a great opportunity for Joe to follow up his win against Fonfara by fighting a legend like Bernard Hopkins. Maybe he'll be able to do what nobody else has ever done to Bernard -- knock him out. With a puncher like Joe, you never know.

"I have the quintessential working man, a working-class guy, fighting the ultimate workhorse in Hopkins, who has been plying his craft for decades. But at 51, he can complete at the top level because he's been so disciplined."

De La Hoya, a Hall of Famer who retired at age 35 in 2008, said he had no concerns about Hopkins fighting just a month before he turns 52. "He is in better shape than a lot of 20-year-old kids fighting today," De La Hoya said. "But Bernard wants to end his career before he turned 52. I really believe Hopkins will leave the sport after this fight and he will leave the way he chose to leave. Joe Smith will be a tough test, but I think Bernard Hopkins will put on a masterful performance for everyone to witness. The fact that it's his last fight, he knows in his heart and his head that he has to go out on top, and Hopkins is the best at doing that.

Hopkins would reign for a decade, making a division-record 20 consecutive defenses and unifying the titles along the way as he won a four-man unification tournament in 2001. He easily outpointed Keith Holmes to unify two belts in the semifinals, then met Felix Trinidad in the final on Sept. 29, 2001, at Madison Square Garden in New York. The fight was originally scheduled for Sept. 15 but was postponed because of 9/11 and became the city's first major sporting event after the terrorist attack.

Hopkins dominated heavily favored Trinidad, knocking him out in the 12th round to become the division's first undisputed champion since Marvin Hagler in the 1980s. After losing the title by close decision to Jermain Taylor and another tight decision in a rematch, Hopkins moved up two divisions to light heavyweight and outpointed Antonio Tarver in another major upset to win the lineal title. After losing it to Joe Calzaghe by split decision in 2008, Hopkins faced then-middleweight champion Kelly Pavlik in a nontitle, catch-weight fight at 170 pounds. Again a big underdog, Hopkins put on a masterful performance. He dished out a one-sided beating to Pavlik in a blowout decision.

Hopkins avenged the loss to a faded Jones in 2010, and -- in a 2011 rematch of a draw with light heavyweight champion Jean Pascal -- Hopkins scored another upset. He outpointed Pascal on his home turf in Montreal to claim the title and become, at age 46, the oldest fighter in boxing history to win a world title.

He later lost it to Chad Dawson, but, when he easily outpointed Tavoris Cloud to win another light heavyweight title in 2013, he broke his own record at age 48. A defense against Karo Murat (2013) and a unification win against Beibut Shumenov (2014) added to his long list of age-related records.
Related topics:
sportsespnnews uk boxingboxingjoe smithbernard hopkins
Copyright © 2022 ESPN Internet Ventures. All rights reserved.
TOP STORIES
Winter storm moves out, refreeze possible overnight
NCSHP reports 200 crashes statewide, urges drivers to stay home
Dozens of RDU flights canceled through Monday evening
Monday events canceled, postponed due to winter weather
Why do we get freezing rain instead of snow or sleet?
FBI identifies hostage-taker at Texas synagogue
How to drive on snow, ice and get out of a skid
Show More
Expect more worrisome COVID variants after omicron, scientists say
After Biden's first year, the virus and disunity rage on
Novak Djokovic leaves Australia after court rejects visa challenge
Ukraine claims Russia behind cyberattack in 'hybrid war'
Hostages in N. Texas synagogue 'out alive and safe,' Gov. Abbott says
More TOP STORIES News