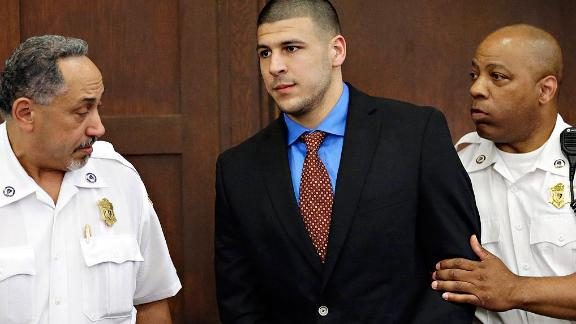 A bid by former New England Patriots tight end Aaron Hernandez's lawyers to suppress evidence from a cellphone and video surveillance taken from his Massachusetts home during authorities' investigation of the killing of Odin Lloyd was rejected Monday by the judge hearing the case.

She hasn't yet ruled on a request to suppress evidence from other cellphones and three iPads seized from the house in North Attleborough.

"There was a reasonable basis for inferring that the home surveillance system likely captured the images of whoever entered, left, and returned to Hernandez's house in the hours immediately before and after the shooting," Bristol Superior Court Judge E. Susan Garsh wrote, according to The Boston Globe. "Without doubt, the surveillance video was related to the criminal activity under investigation.

"There has been no showing that the scope of the warrant was impermissibly broadened beyond the foundation of probable cause."

Hernandez, 24, has pleaded not guilty to murder in the 2013 shooting death of Lloyd, a semi-professional football player who was dating the sister of Hernandez's fiancee. Two of his associates have also been charged with murder. Hernandez has also pleaded not guilty in a second case in which he is charged with killing two men in Boston in 2012. He's being held without bail.

Patriots coach Bill Belichick, owner Robert Kraft and director of player personnel Nick Caserio were interviewed by investigators last summer as part of the probe into a murder allegedly committed by Hernandez, according to multiple reports Monday afternoon.

The documents also revealed that investigators obtained 33 pages of text messages between Hernandez and Belichick from February-May 2013, just months before Lloyd's death, according to reports. The documents were turned over to Hernandez's defense team as part of the discovery process in advance of the former tight end's trial, which is tentatively scheduled for October.

The Patriots agreed to produce 317 pages of materials sought by Hernandez's attorneys, but objected to producing scouting reports and a psychological profile. A July 22 hearing will be held to determine whether the defense team gets them.