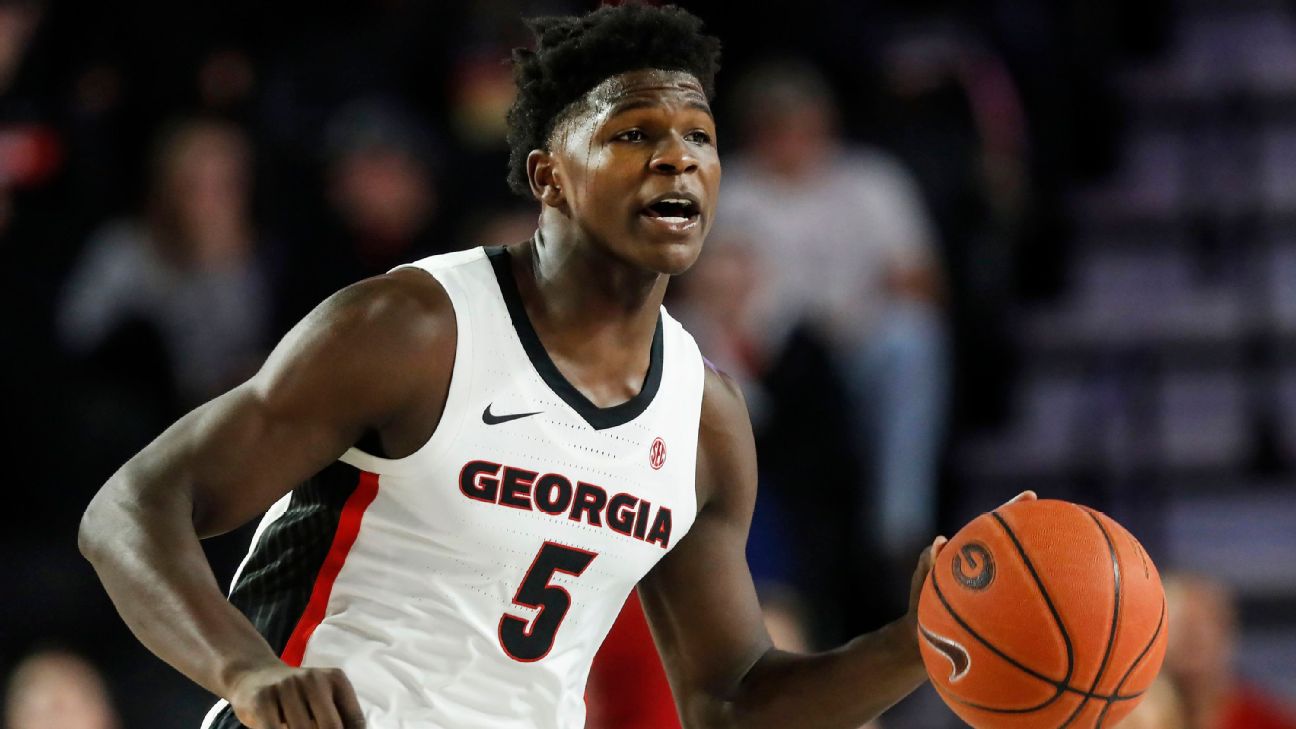 During Feast Week, college basketball will give fans a bountiful showcase of marquee games and individual highlights. The tournaments and key matchups comprise an impressive offering for the sport.

We've already entered the fourth week of the season and gained a better perspective on the current hierarchy. There is nothing definitive at this point in the year. But this week's games will help us answer some questions about the top teams and players in America as we enter December.

Will Cole Anthony shake his early slump and lead North Carolina to the Battle 4 Atlantis title?

It's not difficult to find a stat that solidifies the North Carolina freshman's status as one of America's top players. Through four games, he's averaging 22.8 PPG, 8.0 RPG and 4.5 APG. The five-star recruit announced his arrival with a 34-point effort in his team's season-opening win over Notre Dame.

Since then, however, Anthony has struggled to maintain the efficiency he demonstrated that night. He has connected on just 34 percent of his shots inside the arc and 30.4 percent of his 3-point attempts while also committing 10 turnovers in his last three games.

We all know what the projected lottery pick can do. And his skill set is undeniable. But he'll have to be an effective and consistent leader to help North Carolina leave the stacked Battle 4 Atlantis field with a championship.

To reach the title game, the Tar Heels will need wins over Alabama and the Michigan-Iowa State winner. In the championship game, Gonzaga, Oregon or Seton Hall might await Roy Williams' squad. It's not an easy path. And it's also a significant test for Anthony, a great young player who can get back on the right track with a string of excellent performances in this tournament.

Could an underdog spoil the Maui Invitational?

A seasoned gambler would likely side with Vegas and put money on Kansas and Michigan State meeting in the finale of this year's Maui Jim Maui Invitational. That's the most likely outcome in the event. Last year, Duke and Gonzaga met for the championship in a classic game. Kansas and Michigan State, which both lost in the Champions Classic in New York this season, could stage a similarly exciting and meaningful matchup.

But the field has a few sleepers who could spoil that possibility. Georgia's Anthony Edwards (19.3 PPG) could have a breakout performance and help the Bulldogs pull off an upset or two. The Dayton team they'll face in their opening matchup, however, has made a ridiculous 72 percent of its shots inside the arc, the top mark in America.

Jake Toolson is averaging 16.0 PPG for BYU, which has a win over a solid Houston team. And Mick Cronin's roster still has some of the top recruits who anchored Steve Alford's final classes at UCLA. Could a Bruins team that just lost to Hofstra make strides in Maui? We'll see.

The timing of this event means a lot, too. Teams are evolving and maturing each week. A year ago, Auburn tussled with Duke in the semifinals of the Maui Invitational. The postgame analysis centered on Duke's youth and its resilience. But that wasn't a fluke for the Tigers, as we learned when Auburn made its run to the Final Four.

How good is Maryland?

The Terps enter this week's Orlando Invitational as the most imposing collection of talent in the field. They've grabbed nearly 40% of their missed shots. Jalen Smith (14.4 PPG) leads a group of four Maryland players who are averaging double figures. Plus, the Terps have forced turnovers on more than 22% percent of their opponents' possessions.

They should battle for the Big Ten title. But the Orlando Invitational is filled with top-100 programs (USC, Temple, Davidson, Marquette) that are still finding their way in the first month of the season. Maryland could run through the field with a powerful performance for the Big Ten. Or it could do that Maryland thing and lose a game to an ambitious underdog and fall in the Top 25 rankings. Let's see what the Terps are made of.

Rick Barnes lost Admiral Schofield, Grant Williams, Jordan Bone and Kyle Alexander from a Tennessee squad that earned a No. 1 ranking in 2018-19 and lost to Purdue in the Sweet 16, a memorable thriller. Any team that loses four players of that caliber (they're all in the NBA or G League) should take a step back. But the Vols have excelled in their first four games, connecting on 41% of their 3-pointers while holding opponents to a sub-42% clip inside the arc.

The Emerald Coast Classic might possess the most top-to-bottom quality, pound-for-pound, in Feast Week with Tennessee, Florida State, Purdue and VCU all battling in Niceville, Florida. We'll probably see those four teams in the NCAA tournament. Florida State has a win over Florida. Purdue has held its opponents under 50 points in two straight games, while VCU's Marcus Evans has averaged 13.2 PPG and made 45.5% of his 3-point attempts for a Rams squad that beat LSU two weeks ago.

If Tennessee emerges with the title in that field, the Vols would have to be considered serious contenders to win the SEC title, while Barnes, again, would lead the early race for national coach of the year.

Is Arizona the most exciting team in America?

Arizona hasn't had a national showcase yet, with wins over Northern Arizona, Illinois, San Jose State, New Mexico State, South Dakota State and Long Beach State. The Wildcats' participation in this week's Wooden Legacy could change that, despite the event's lukewarm field.

They won't face any premier competition, but the Wildcats will flood SportsCenter with highlights. They're a good team and fun to watch. More people around the country will agree once they see them play and, likely, dominate this week.

Games we hope to see this week

In a rematch of the 2017 national title game, Gonzaga and North Carolina could prove they're both capable of making a run to Atlanta. Cole Anthony will face his best opponent to date, while Gonzaga, after the return of Killian Tillie, must handle its most athletic foe. Two of America's best in one of the season's top early matchups? We'll take it.

To make this 2017 Final Four rematch happen, Oregon would have to beat Seton Hall and probably Gonzaga. With a win over North Carolina in the championship game, Oregon would have a case for the top spot in next week's rankings. With wins over Houston and Memphis, no team in the country would have a better résumé.

This is easy, right? Cassius Winston and Michigan State against Udoka Azubuike and Kansas in Hawai'i? That's a great matchup between a pair of teams that suffered losses in the Champions Classic. This feels like a potential Final Four clash.

Both Tennessee and VCU have commenced the season with surprising starts. A title matchup between a pair of nationally ranked teams would be a good test for both clubs. This, however, is not guaranteed. With Purdue and Florida State in the field, anything could happen, including a Sweet 16 rematch between Tennessee and Purdue. We'd be fine with that, too.

Jalen Smith and Anthony Cowan lead a Maryland team that has cracked the top 15 of every reputable set of rankings while still searching for a signature win. Marquette has a double-digit win over Purdue and a double-digit loss to rival Wisconsin. Markus Howard has made 46% of his 3-point attempts. Marquette is a mystery. Let's see how the Golden Eagles perform in the Sunshine State.

Texas Tech is playing great defense again. Surprised? We're not either. Check this: With Jahmius Ramsey on the floor, Texas Tech has held opponents to just 73 points per 100 possessions, according to hooplens.com. We'll see if the Red Raiders can maintain that defensive success if they face a Creighton team that has made 42% of its 3-point attempts.

In a post-Ethan Happ world, the Badgers have been an efficient team, and their only blemish, an overtime loss to Saint Mary's at a neutral site, won't hurt their résumé. Getting a win over Auburn, a good team that has made 61.5% of its shots inside the arc, would change the narrative about a Wisconsin team that's supposed to be rebuilding after losing one of the top players in the program's history. Another key win for Auburn would suggest the SEC might present the most contentious title hunt in the country.

Arizona, as mentioned, is a young team that continues to blossom under Sean Miller. The Wildcats shouldn't have any trouble with the field in the Wooden Legacy. But Ed Cooley has veterans who are desperate for some good news after suffering losses to Penn and Northwestern. 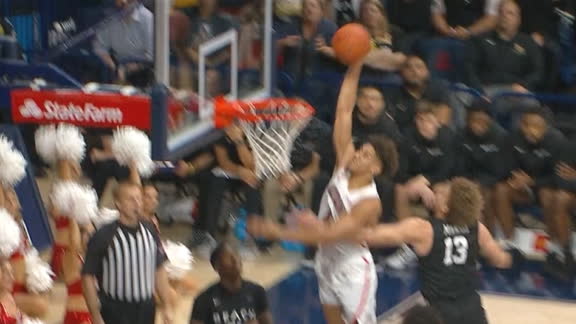