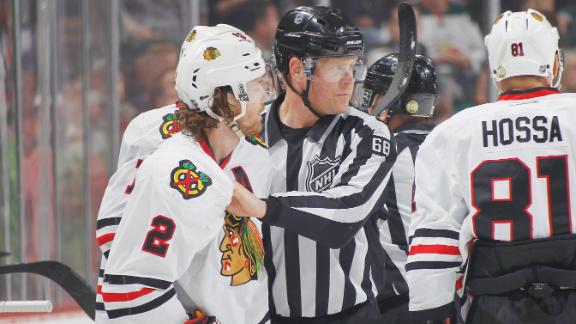 Keith was assessed a match penalty for intent to injure and is suspended indefinitely. He was knocked to the ice by Coyle and retaliated by swinging his stick while lying on the ice. Coyle was left with blood dripping down the bridge of his nose.

The NHL's Department of Player Safety tweeted Wednesday that Keith has been offered an in-person hearing.

The penalty, at 9:27 of the first period, left the Blackhawks short-handed for five minutes, though the Wild did not score during the extended power play. It also left the Blackhawks without two key defensemen;Brent Seabrook missed the game because of illness.

Because he was assessed the match penalty, Keith is suspended until the league reviews the play. Keith's case won't be helped by his previous suspension, in the 2013 playoffs, for swinging his stick and hitting Los Angeles Kings forward Jeff Carter in the face.

The Blackhawks visit the Winnipeg Jets on Friday night.

Duncan Keith ejected for swinging his stick
Blackhawks defenseman Duncan Keith is given a match penalty and, by rule, suspended indefinitely pending a review after he swings his stick and hits Wild center Charlie Coyle in the face during the first period.