Blackhawks to raise banner in NHL season opener vs. Rangers 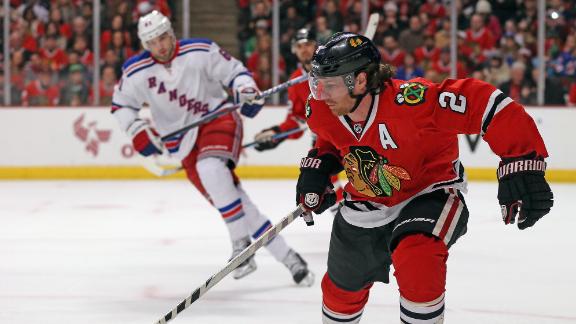 The National Hockey League released the 2015-16 regular-season schedule Thursday, and there are already some prime matchups worth circling on the calendar.

The NHL will start the season with four games on Wednesday, Oct. 7, with the Stanley Cup champion Chicago Blackhawksholding their banner-raising ceremony prior to their opener against the New York Rangers at United Center.

Opening night in Toronto should also be an interesting one, as it will usher in a new era with newly signed coach Mike Babcock behind the bench for the Maple Leafs as they host the Montreal Canadiens.

Babcock, who inked an eight-year, $50 million deal with the Leafs this offseason after coaching in Detroit for 10 years, will then return to his old haunt as the visitor for the Detroit Red Wings' home opener on Oct. 9.

It will be a new era for the New York Islanders, as well, as the 2015-16 season will mark the first season they play in their new home at Brooklyn's Barclays Center. They open there with a game against the Blackhawks on Oct. 9.

The start of a new season will be a welcome one for embattled organizations such as the Edmonton Oilers and the Buffalo Sabres, who are in line to snag the two most talented young prospects in this weekend's draft.

Top prospect Connor McDavid, a lock to be selected first overall in Friday's draft, is expected to make his long-awaited debut when the Oilers visit the St. Louis Blues on Oct. 8.

The NHL schedule also features three outdoor games. The Boston Bruins will host the rival Montreal Canadiens on New Year's Day at Gillette Stadium, and both the Minnesota Wild and the Colorado Avalanche will have outdoor matches of their own this season.

The Wild will host the Blackhawks at TCF Bank Stadium on the University of Minnesota campus on Feb. 21, and the Avs will host the Red Wings at Denver's Coors Field the following weekend.