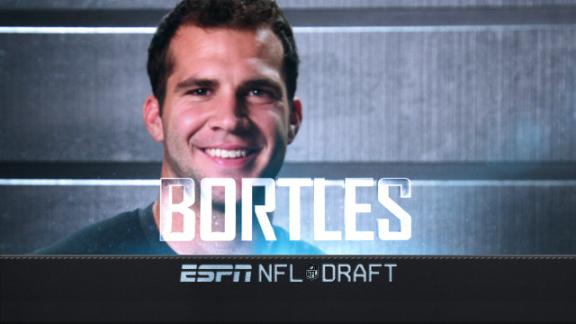 The Jaguars had been linked to linebacker Khalil Mack, receiver Sammy Watkins, and quarterback Johnny Manziel in the weeks leading up to the draft, but general manager David Caldwell said Bortles was unanimously the No. 1 target among the team's coaches and personnel people.

The Jaguars were so enamored with Bortles, the American Athletic Conference Offensive Player of the Year in 2013 after throwing for 3,581 yards and 25 touchdowns, that coach Gus Bradley admitted they would have taken Bortles even if South Carolina defensive end Jadeveon Clowney was still on the board. Clowney went first overall to the Houston Texans.

According to ESPN Stats & Information, the Jaguars, after drafting Blaine Gabbert with the 10th overall pick in 2011, joined the 1982-83 Colts as the only teams to select two quarterbacks with a top-10 pick in a four-year span.

Bortles is the sixth quarterback the Jaguars have drafted and just the second since 2003. He is only the second Central Florida player drafted in the first round (Daunte Culpepper was taken with the 11th pick in 1999).

Caldwell said Bortles is very competitive, and the GM liked the fact that Bortles was the only one of the top quarterbacks to do every drill and workout at the NFL combine in late February.

"I love to compete," Bortles said. "I love to play football and I mean anytime somebody's going to ask you to throw at the combine, you get an opportunity to do that in front of every single NFL coach and GM in the country, I don't know what's wrong with you if you don't take that challenge on and go compete."

Bortles, however, won't get much of a chance to do that on the field in 2014. Caldwell said Chad Henne will be the team's starter in 2014 and Bortles will get the chance to develop without the pressure of having to win games.

"It's such an important position in this league and you want to do it right," Caldwell said. "That's what we're about. ... We have to make it work. We can't just throw him out there. We've seen what happens when that happens."

Bortles led UCF on six second-half comebacks last season, which was tied for most among any FBS quarterbacks. According to ESPN Stats & Information, Bortles had an 89.6 Total QBR when trailing in the second half, which ranked only behind Louisville's Teddy Bridgewater.

Despite being sacked 51 times during his three seasons, Bortles never missed time to injury. He also completed 50.7 percent of his passes while under duress last season, which was fourth-best among quarterbacks from AQ conferences.