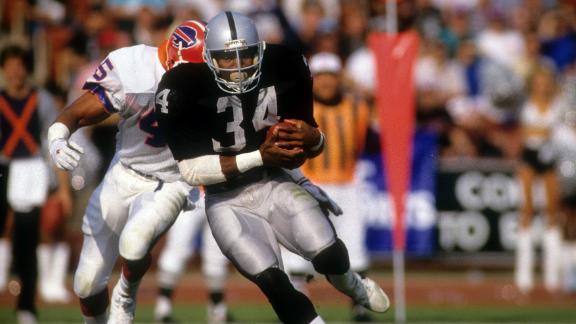 "Stick to what got %5BWilson%5D in the headlines, not baseball," Jackson said Tuesday, according to CSNChicago.com. "Twenty-five or 30 years ago when I did it, I'm not trying to say anything negative about other athletes, but the talent pool wasn't that deep. In this day and age, with all the high-tech training, computer-engineered workouts and the proper food and diet, if you try to concentrate on two sports, I guarantee you're going to ride the bench in both because the talent is that deep. Stick to whatever sport you're comfortable with and let everything else go."

Wilson, who led the Seahawks to a Super Bowl victory in February, spent a day with the Texas Rangers in spring training after the club selected him in the Rule 5 draft in December. He said he missed the game of baseball, which he started playing when he was 4 years old, but that his priority remained the Seahawks.

"You never say never," Wilson said in early March. "I've always had the dream of playing two sports. If somehow it was a miracle that it could work out, I'd consider it. At the same time, my focus is winning the championship with the Seattle Seahawks and hope to be playing for a long time."

Jackson, the only athlete to be named an All-Star in both football and baseball, said he doubts he could play both sports at an elite level in today's athletic environment.

"I probably couldn't, no," Jackson said, according to CSNChicago.com. "Just because the talent pool is that deep now. If my kids want to do both sports -- 'No. No. No.' ... If you try to do both you're going to be riding the bench in both. You'll never get to that level that you want to get to if you split your time between multiple sports."

Jackson, 51, made the remarks at the Chicago White Sox camp in Glendale, Ariz. He is serving as an ambassador for the team, having played for the White Sox in 1991 and '93. Jackson, a left fielder, spent the bulk of his baseball career with the Kansas City Royals from 1986 to 1990 before finishing his career with the California Angels in 1994. He batted .250 in his major league career with 114 home runs, 415 RBIs and 82 steals in 694 games, and played in the 1989 All-Star Game.

He also was a Heisman Trophy-winning running back at Auburn and played for the Los Angeles Raiders from 1987 to 1990, averaging 5.4 yards per attempt for 2,782 yards and 16 touchdowns in his career. He was named to the 1990 Pro Bowl.

Until his spring training appearance with the Rangers, Wilson hadn't been in a baseball uniform since 2011, when he played Class A ball with the Colorado Rockies, the team that drafted him in the fourth round in 2010 and signed him for $200,000. Wilson played parts of two seasons in Class A in 2010 and 2011, hitting a combined .229 in 315 at-bats with five homers and 26 RBIs.

Wilson opted to play football for Wisconsin in 2011 and then headed to Seattle as a third-round pick in the 2012 NFL draft.

Information from ESPNDallas.com's Richard Durrett and ESPNChicago.com's Doug Padilla was used in this report.