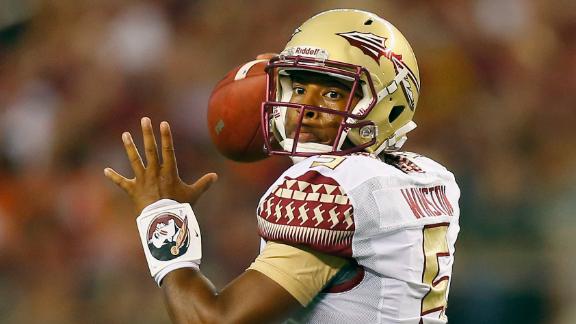 In an interview Tuesday on "The Jim Rome Show," Bo Jackson lashed out at fellow Heisman Trophy winner Jameis Winston, suggesting the star Florida State quarterback has ignored his advice even while his off-the-field incidents have escalated.

"I really don't know who is giving this young man guidance," Jackson said in the interview. "I have communicated with him, and I just talked to him like I was his dad. The things that you need to do. And this was before the incident where he was [suspended] from the baseball team [for stealing crab legs].

"I'm the type of person, I will go out of my way to help anybody. Normally, I don't like giving people advice if I haven't been down that road myself. But if I give you advice on something that I know more about than you by just falling out of bed in the morning, if you can't take that advice and learn from it, then I've got nothing else to do with the situation. You're on your own."

Jackson wouldn't specify exactly what he told Winston, but noted: "If I told you what I told him, it'll probably singe the hairs in your ears."

Jackson and Winston have a lot of common.

Both are from Bessemer, Alabama.

Both captured the Heisman Trophy, with Jackson winning in 1985 as a star running back at Auburn and Winston claiming the award as a freshman last year.

And both have succeeded in multiple sports. Jackson played in the NFL and MLB before a hip injury ended his professional career, and Winston also pitches for the Seminoles baseball team.

But evidently, their common ground has done little to sway Winston, who has been at the center of more controversy in the past week. Florida State announced Friday that it will conduct a hearing to determine whether he violated the school's conduct code during an alleged sexual assault in December 2012. And the university's compliance department is looking into why more than 950 items with Winston's signature were authenticated.

Jackson knows Winston has to change.

"I will lend you a hand. And if you take that hand for granted, I will yank it back and go about my business, go on about my life. That's how it is," he told "The Jim Rome Show."

"Jameis Winston needs to make some changes in his life. Because it's affecting him now, and it's definitely going to affect him down the road."