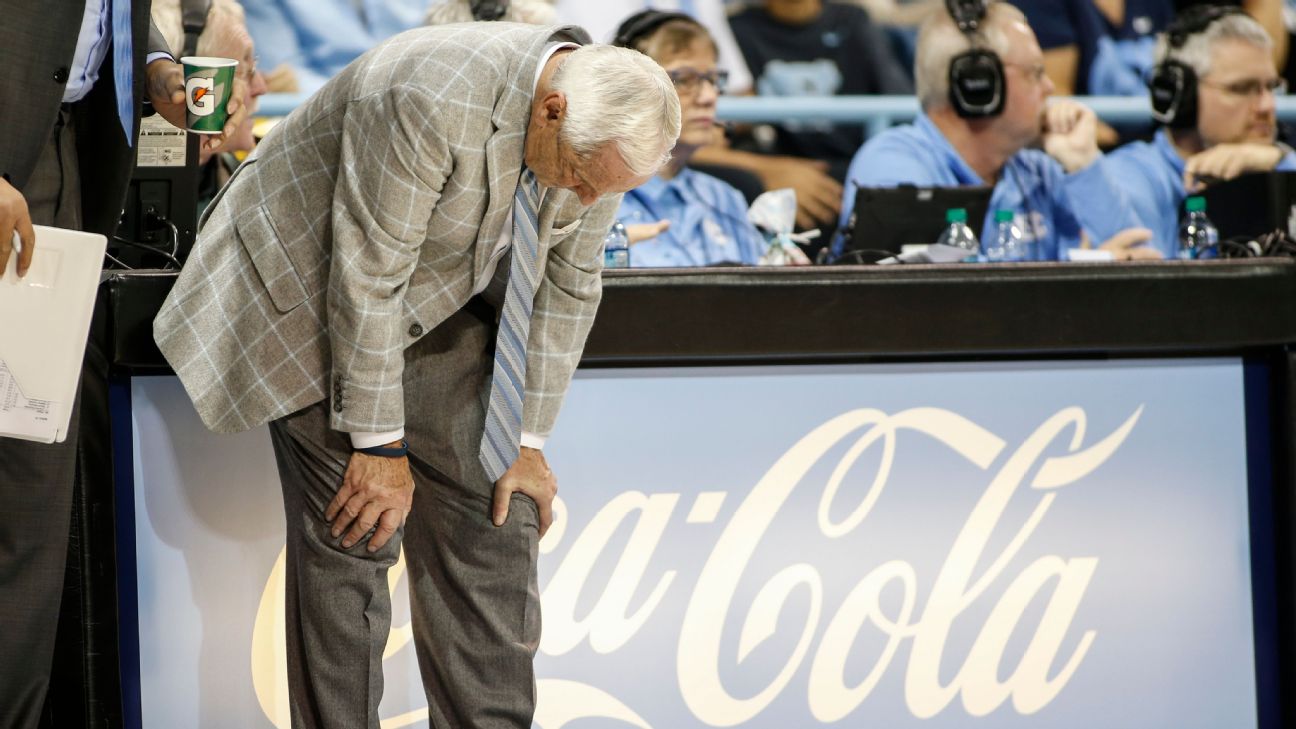 There are many different ways to determine conference strength, and by most objective measures, the Atlantic Coast Conference has traditionally ranked at or near the top of the charts. But a new decade is here, and at this moment, the ACC is not even a top-three basketball conference, and is on pace for one of the weakest seasons since its 2013 expansion.

With the first full weekend of conference play upon us, the ACC is fourth in average BPI and has only five teams in the top 50 of BPI. If those marks hold up, both would be the league's worst since 2013.

So, what is going on in the traditional powerhouse conference of college basketball?

No team encapsulates the ACC's fall this season quite like North Carolina, which doesn't even have the top BPI rating of schools with UNC in their name -- that designation currently belongs to UNC Greensboro (No. 62 in BPI). North Carolina is 66th in BPI entering Friday's games, its worst ranking of any day in the history of the BPI metric (since 2007-08 season).

Yes, the 8-5 Tar Heels have played the seventh-hardest schedule in the country, and some will point to the absence of Cole Anthony (knee) over the last several weeks as reason to be optimistic that North Carolina can turn it around when he returns. But blaming the team's issues on Anthony's injury obscures UNC's deeper problems. Since he last played on Dec. 8, the Tar Heels have been within one point or even exceeded BPI's predicted point margin in three of their four games, with the exception being the loss to Wofford. That's a small sample, but evidence that BPI has North Carolina pegged accurately, with or without Anthony. Bracket Predictor gives North Carolina a 12% chance to make the NCAA tournament.

There are bright spots for the league, of course.

Duke is not the problem. While this Duke team is viewed by BPI as two points per game worse than last year's Zion Williamson-led team, it remains No. 1 in BPI as conference play begins. Louisville is also having a resurgent year, ranked No. 6 in BPI.

But, after those two teams, there is not much to write home about in the ACC this season. ESPN's Bracket Predictor projects 5.3 ACC teams in the 2020 NCAA tournament. The last time the ACC received fewer than six bids was 2013, when it had three fewer basketball members than it does in its current 15-team configuration.

While the ACC is experiencing a down year, the opposite is true in the Big Ten. The league's six AP Top 25 teams might even be underselling the quality of the league. The conference has the highest average BPI, as well as the most teams in both the top 25 and top 50 of BPI's ratings. Though Michigan State, Michigan, Maryland and Ohio State have gotten most of the early attention, it's actually two teams farther down the list that are equally indicative of B1G strength: Purdue and Wisconsin. Purdue received just 12 votes in the latest AP poll, and Wisconsin had zero, but BPI is much higher on the Boilermakers and the Badgers than the writers are.

Looking beyond Purdue's 9-5 record, BPI sees the 12th-best team in the country, one that has done what good teams do and blown out weaker opponents. Purdue is 7-1 in games decided by more than 10 points, versus 2-4 in games decided by fewer than 10 points. The latter points to some bad luck in close games, a characteristic that tends to be less predictive of the future. Purdue is 13th in adjusted defensive efficiency, seventh in points allowed in the paint, and according to KenPom, a Boilermakers team that has been traditionally strong in the paint ranks 22nd in offensive rebounding percentage.

What's more, Purdue drew a favorable conference schedule this year, and will only have to play Ohio State and Michigan State once each in conference play. If Purdue gets close to or exceeds its projected 12-8 record in conference, this will be a team to watch in the NCAA tournament.

BPI predicted Wisconsin as a top-10 team in the preseason, and while that seems to have been a bit optimistic, the Badgers are 17th in BPI and have posted the 24th-best adjusted efficiency so far. That is better than ranked teams including Villanova, Kentucky, Virginia, and Wichita State. Wisconsin is efficient and plays slow (11th-slowest pace), much like the great Virginia teams of the past decade. In two months, you can expect this team to have some very good wins on its résumé. Bracket Predictor gives Wisconsin a 59% chance to have a No. 6 seed or better in the NCAA tournament.
Report a correction or typo
Related topics:
sportsespnnorth carolina tar heelspurdue boilermakersduke blue devilswisconsin badgersmens college basketball
Copyright © 2021 ESPN Internet Ventures. All rights reserved.
TOP STORIES
CDC reverses course on indoor masks in some parts of US
Some Wake parents OK with masks as long as kids can be in class
Mental health experts applaud Biles' tough decision at Tokyo Games
Why this Haitian restaurant relocated from Brooklyn to Edgecombe Co.
LATEST: Cooper to 'review changes to CDC guidance'
800K COVID-19 vaccine doses in NC could expire by end of August
Show More
As COVID-19 cases surge, nervous parents prepare for school year
1 dead in movie theater shooting during showing of 'The Forever Purge'
495 new hepatitis A cases reported in NC this year
4-year-old dies after report of drowning in Harnett County
Mother, boyfriend charged after 5-year-old's death in Aberdeen
More TOP STORIES News