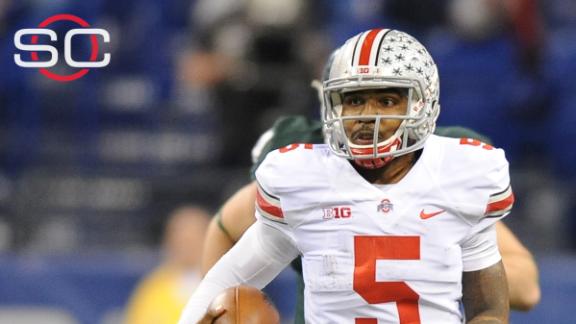 Braxton Miller has affirmed his plan to stay at Ohio State and will continue to focus on rehabilitation and recovery from shoulder surgery, a source close to the quarterback told ESPN's Joe Schad on Thursday.

Miller, the Big Ten offensive player of the year in 2012 and '13, tweeted Wednesday that he had a successful follow-up visit at the office of Dr. James Andrews regarding the shoulder.

Then, in response to a question from the Columbus Dispatch about his future, he answered he would make an announcement next week.

As a recent graduate, Miller is eligible to transfer and play in 2015. But, as expected, he will remain at Ohio State and compete next month with Cardale Jones and J.T. Barrett for the starting job.

Andrews performed surgery last August to repair a torn labrum in Miller's right shoulder. In his place, Barrett started 12 games and broke Miller's single-season school record for total offense. After Barrett broke his right ankle in the regular-season finale, Jones led the Buckeyes to three wins and a national championship.

Miller and Barrett were limited in spring practice as they continued to rehab.

"Braxton is pretty close to full speed," Meyer said, according to Cleveland.com. And Barrett, according to the coach, is "close to 95 percent."

Information from ESPN.com's Mitch Sherman was used in this report.