Braxton Miller out for season 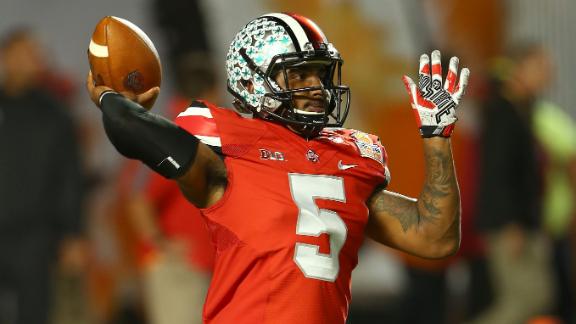 Ohio State quarterback Braxton Miller will not play this season after sustaining another injury to his right shoulder while throwing a short pass in Monday's practice.

Ohio State confirmed the news on Tuesday afternoon after ESPN's Brett McMurphy and other media outlets reported earlier that Miller's injury would end his season. Miller had an MRI on his throwing shoulder in the morning.

"I'm not sure that America really understands the time, the training," Ohio State coach Urban Meyer told ESPN Radio's "Mike & Mike" on Wednesday morning. "You train hours upon hours upon hours. So you just see a guy that's like a member of your family go down and you're like, 'Ugh.' Your gut starts to hurt. You go over to see if he's OK. It was a tough situation."

Widely tabbed as a Heisman Trophy contender this preseason, Miller suffered the injury during a noncontact portion of practice just hours after the senior declared himself 100 percent healthy following offseason surgery to the shoulder.

Miller threw for 2,094 yards and 24 touchdowns and ran for 12 more scores in leading the Buckeyes to the Discover Orange Bowl last season.

Ranked fifth in the preseason Associated Press poll released Sunday, Ohio State is expected to be in the national title conversation.

"The good thing is that when you look to your right, look to your left, it's kind of exciting. If I'm a young player, that's four more touches that I get now. We're taking the opposite approach: We're not worried about November, we're worried about tomorrow."

The reigning two-time Big Ten Offensive Player of the Year, Miller first hurt the shoulder in the Orange Bowl. He had surgery that prevented him from contact in spring practice and was held out of several practices and scrimmages in August.

"I love Ohio State and Buckeye nation, and my goal is to come back from this injury stronger and better than ever," said Miller, who has yet to take a redshirt season. "I am on course to graduate in December and I want to attend graduate school, and then return to lead the Buckeyes next season [2015].

"In the meantime, I want to give all the support I can to my coaches and teammates as they chase a championship this season."

Miller did not practice this spring and had been limited by athletic trainers and coaches in the number of throws he was making this fall.

Redshirt freshman J.T. Barrett is expected to be the starter when the Buckeyes open the season Aug. 30 against Navy in Baltimore. Meyer said Saturday that redshirt sophomore Cardale Jones is the third-team quarterback.

"Our guys have responded," Meyer told ESPN Radio. "The best thing about everything has been Braxton's reaction. He's got a big smile on his face, he comes out to practice, talking to our quarterbacks. He's a grown man."

Miller is one of the Big Ten's most decorated quarterbacks, and the falloff in experience to Barrett and Jones is huge.

"One of the jobs of a coach is 'Let's worry about today,'" Meyer told ESPN Radio. "... Down the road, I think we're going to be a very good team. Has my thought changed [since the injury]? Not at all."

Starting as a freshman, Miller has thrown 666 passes in his glittering three-year career. Barrett has never played in a game, and Jones has thrown only two passes.

Miller has run for 32 touchdowns and passed for 52, putting him in reach of many of Ohio State's career records for quarterbacks. Jones has run for one touchdown and has never thrown for one.

Barrett was an acclaimed recruit out of Wichita Falls, Texas, who watched with Jones last year as Miller took most of the snaps in the Buckeyes' 12-2 season. When Miller sprained a knee early against San Diego State and missed the rest of that game as well as the next two against California and Florida A&M, senior Kenny Guiton had big games while leading Ohio State to victories.

But Guiton graduated, and the Buckeyes might have to adapt on the fly. Making that even more difficult is that Ohio State is without four of its five starting offensive linemen, its leading receiver (Corey Brown) and 1,500-yard rusher Carlos Hyde from last year's team.

Miller missed most of his senior season at high school in Huber Heights, Ohio, and has frequently been sidelined with injuries at Ohio State. As a freshman, he sprained an ankle against Nebraska -- a game in which the Buckeyes built a big lead but blew it -- but was able to play in subsequent games.

Two years ago, he missed time during the game at Michigan State when he fell into an equipment case on the sideline and later in the game hyperextended his left knee. He was hit hard by Purdue's Josh Johnson later in the season and missed the rest of that game, with Guiton leading a stirring march in the final minute for a touchdown and the tying two-point conversion. The Buckeyes won in overtime.

Last season, after the knee injury, Miller partially tore the labrum in his right shoulder on the first possession against Clemson in the Orange Bowl. He played the rest of the game. When the injury was discovered later, he had surgery in February.

Ohio State said at the time that Miller had "minor, outpatient surgery." But he has had problems with the shoulder since.

Still, he has repeatedly said he would be ready to go in the opener and did so again between practices Monday. His workload had been reduced to avoid any ongoing soreness in the arm.

Miller has a $1 million total disability policy that he could collect if he never plays football again, a source told ESPN. That premium has been paid by Ohio State, according to the source, but Miller does not have loss-of-value insurance that would cover him if he significantly slipped in the NFL draft.

"This is our third year together," Meyer said of Miller. "When you spend that much time, especially with your quarterback ... A lot of people see No. 5, and they see that face mask and they barely see his face. This kid is a wonderful guy. There's no issues.

"He's a great kid who's an extreme competitor. ... He will play in the NFL, there's no doubt in my mind."

Braxton Miller Out For Season
Brett McMurphy discusses the report that Ohio State QB Braxton Miller is out for the season due to a right shoulder injury.

How Will OSU's Offense Fair Without Miller?
Trevor Matich explains why Ohio State QB Braxton Miller creates problems for their opposing defense and the effect Miller's absence will have on the Buckeyes' offense.