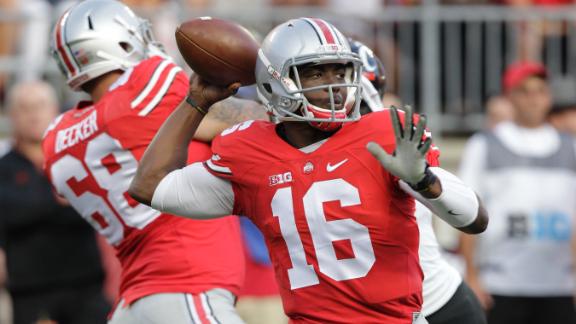 COLUMBUS, Ohio -- A social media post by Ohio State quarterback Braxton Miller was deemed to be a violation of NCAA rules, but it was minor in nature and the senior will not lose his eligibility.


The Buckeyes reported the potential violation after Miller posted a photo of himself with AdvoCare health supplements on Instagram last month and included his name on a website that sells the products, which qualified as "promotion of a commercial product," according to NCAA rules regarding amateur status.

Miller removed both of the offending posts, Ohio State reported the case to the NCAA, and the matter was resolved on Thursday with the sport's governing body reinstating the eligibility for the two-time Big Ten Player of the Year.


"The NCAA has determined that Braxton Miller's Instagram post on March 24, 2015, was deemed to be a promotion of a commercial product," a statement released by the athletic department said. " ... The NCAA has reinstated Braxton's eligibility without any conditions. This was considered a minor violation and the matter is now closed."


The NCAA allows for outside employment of student athletes, and Miller was not in violation of any rules by selling AdvoCare products.


But high-profile players like the decorated Ohio State quarterback can't use their status in an effort to personally profit, which raised questions in Miller's situation and prompted the investigation.


Sources familiar with compliance issues previously told ESPN.com that Miller wasn't likely to face any sort of punishment outside of education on the matter, and that his steps to remove the offending post and references to his name on a website selling products would likely be sufficient to prevent issues.


Miller missed all of last season after suffering a shoulder injury during training camp that required surgery, putting his decorated career with the Buckeyes on hold after setting numerous school records thanks to his dual-threat ability at quarterback.


He's not expected to resume throwing without restrictions until this summer, when he'll be thrust into a heated three-man battle for the starting job alongside J.T. Barrett and Cardale Jones.