Brewer 'not yet satisfied' by response 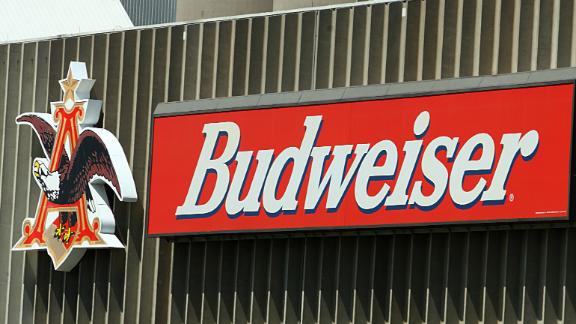 Anheuser-Busch, the parent company of the official beer of the NFL, issued a strong statement expressing its displeasure over how the league has responded to its players being connected to incidents of domestic violence and child abuse.

"We are disappointed and increasingly concerned by the recent incidents that have overshadowed this NFL season," a representative for Anheuser-Busch said in a statement. "We are not yet satisfied with the league's handling of behaviors that so clearly go against our own company culture and moral code. We have shared our concerns and expectations with the league."

Visa, McDonald's and Campbell Soup Co. say they have also voiced similar concerns to the league.

"We understand. We are taking action and there will be much more to come," NFL spokesman Brian McCarthy said.

Anheuser-Busch commits about $200 million a year in rights fees and additional advertising to the NFL and is in the fourth year of a six-year deal it signed in 2011 that makes Bud Light the official beer of the league. In the last year, more Bud Light has been sold in the United States than any other beer ($5.28 billion at retail). One out of every five beers bought is a Bud Light.

Anheuser-Busch also has paid to lock up the rights as the exclusive beer advertiser of the Super Bowl broadcast for the past 28 years. From 2009 to 2013, the company spent $149 million on advertising for the game, according to Nielsen.

The company's response comes on the heels of Minnesota Vikings banner sponsor Radisson suspending its sponsorship deal with the team Monday night, shortly after the Vikings said they would play Adrian Peterson, who has been indicted on a child-abuse charge.

Also on Monday, Visa said domestic violence in any form is unacceptable and has no place in the NFL and society.

"As a long-standing sponsor we have spoken with the NFL about our concerns regarding recent events, and reinforced the critical importance that they address these issues with great seriousness."

On Tuesday, McDonald's issued a similar statement, saying "we have questions surrounding these evolving situations and are closely monitoring as the appropriate parties investigate these matters."

The restaurant company added it has "communicated our concerns to the league, and we expect it to take strong and necessary actions to address these issues."

Campbell Soup said it had also spoken to the NFL about the Ray Rice video investigation.
"Upon completion of the investigation, we expect the NFL to take appropriate action,'' Campbell Soup Co. said in a statement. "We have shared our views with the NFL.''

Also on Tuesday, Procter & Gamble responded to a fake Covergirl NFL ad that went viral on social media. The ad depicted a woman with a black eye. The company posted a statement on its Covergirl Facebook page saying "domestic violence is completely unacceptable". The company went further, saying that it has "encouraged the NFL to take swift action on their path forward to address the issue of domestic violence."

Last week, another national sponsor, PepsiCo, which pays about $100 million a year for its rights, publicly expressed its displeasure about the league's handling of the cases.

"Domestic violence is completely unacceptable," a PepsiCo spokesman said in a statement. "We are encouraged to see the NFL is now treating this with the seriousness it deserves."

Radisson Dropping Vikings Significant?
Steve Young, Trent Dilfer and Ray Lewis debate whether more sponsors will drop the Vikings and how the team has handled the Adrian Peterson situation.

More Adrian Peterson Accusations Surface
Ed Werder talks about the Radisson hotel chain's decision to suspend its sponsorship with the Vikings, the report that RB Adrian Peterson was accused in a separate child abuse incident involving another son and whether he will play this week.