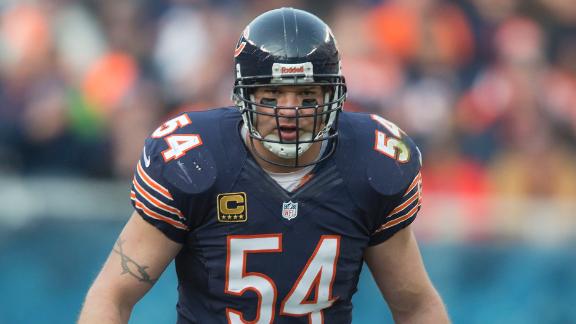 CHICAGO -- Former Bears linebacker Brian Urlacher admitted on Tuesday he "didn't feel all that comfortable being around" the team's facility during the reign of ex-general manager Phil Emery.

"I just think he wants me to feel comfortable around there again," Urlacher told ESPN 1000's "Waddle & Silvy" show. "When Phil was there I didn't feel all that comfortable being around there. I think that's what [Fox] meant. I haven't talked to him yet."

Urlacher revealed that he visited Halas Hall in July while the team was in the midst of training camp in downstate Bourbonnais, Illinois. The ex-middle linebacker met with team chairman George McCaskey, president Ted Phillips and vice president of communications Scott Hagel, but he has not addressed the players in Lake Forest since the end of the 2012 season.

Contract talks broke down between Urlacher's camp and Emery in March 2013. Urlacher later accused the Bears of negotiating in bad faith. The veteran announced his retirement two months later.

"I have no problem with the franchise," Urlacher said. "I have a ton of respect for the McCaskeys, the coaches, everyone. I have no problem with that. The only problem I had was with Phil Emery for the way he treated me in the [contract] situation. There was no hate from me towards the McCaskeys or any ill will towards them. It's just [my career] didn't end the way we drew it up, but whose career does? Except for like Ray Lewis or Jerome Bettis ... or John Elway."

Urlacher added that he felt no joy upon hearing the news that Emery had been fired after three seasons on the job, along with head coach Marc Trestman.

However, Urlacher is excited about the hire of Fox, who won six division titles and reached two Super Bowls while the head coach of the Carolina Panthers and Denver Broncos.

"I think it's awesome," Urlacher said. "We usually get guys who are defensive coordinators. ... They never hire the big-name guys. They've always been out there, but they never seem to hire those guys. Fox fell in their lap. They got lucky that for whatever reason Fox and the Broncos parted ways. It was a great hire. The guy [is] so well respected in football circles. Not just as a coach, but as a man. I've been around him several times. Just a good guy."

Urlacher took to Twitter to continue to sing Fox's praises.

Fox's comments regarding Urlacher led some to speculate that perhaps the former NFL Defensive Player of the Year had interest in coaching.

Urlacher quickly shot down the rumors that he would be added to Fox's coaching staff.

"I knew a lot about the defense they used to play in," Urlacher said. "[New Bears defensive coordinator] Vic Fangio runs a 3-4. That's a whole different animal. I wasn't the greatest technician when I played. Technique wasn't my favorite thing to learn, and I doubt I would be great teaching it. [Coaches] work so much. Maybe when I'm older and my kids are older, but right now my kids are still young. So it's hard to imagine coaching now with my kids so young and all the things I do with them. ... To go along with my golf game and fishing. It's tough to imagine working 90 hours a week during the football season and wanting to do that."

Brian Urlacher Wasn't 'Comfortable' At Bears Facility
Jeff Dickerson discusses Brian Urlacher admitting he "didn't feel all that comfortable being around" the team's facility during the reign of ex-general manager Phil Emery.

Bears' Reasoning For Hiring Fox
ESPN Bears reporter Michael C. Wright explains that the Bears hired John Fox to get the team back to a hard-nosed style of play.