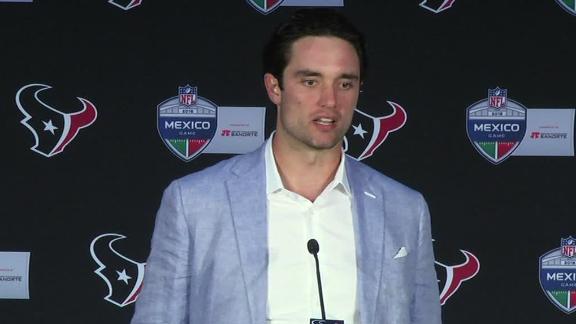 MEXICO CITY -- Houston Texans quarterback Brock Osweiler said a green laser that was shined onto the field and into his eyes during the Texans' 27-20 loss to the Oakland Raiders in Mexico City was "very distracting."

Throughout the game, someone in the stadium shined what appeared to be a green laser pointer on the field when the Texans were on offense.

"I'm still gathering information on what exactly took place, but all I know at this point is, when we were out there on the field on offense, there were multiple times I saw a green laser coming from the stands," Osweiler said. "There were a couple of times it definitely hit me in the eye. And it was very noticeable."

Osweiler refused to say the laser was "the difference-maker" in the game, but he said, "Certainly, having a laser zoomed in on your eyeball definitely affects how you play."

Texans head coach Bill O'Brien would not comment on the laser, saying that was more of a question for security.

Texans players weren't the only ones who noticed.

"Yeah, that was kind of weird," Raiders defensive end Khalil Mack said. "I saw that, and I thought I was in the Twilight Zone."

Osweiler said he had never experienced anything like that while playing football.

"I've never experienced a laser being shined in my eyeball during a football game, let alone a professional football game in the National Football League," Osweiler said. "So I think that was certainly disappointing. But at the end of the day, that's not why we lost the game. That was just one small factor. But it certainly affected how I was playing."

Laser pointers directed at Osweiler during MNF
At several different points during the Texans-Raiders game in Mexico City, laser pointers can be seen directed at Texans quarterback Brock Osweiler.