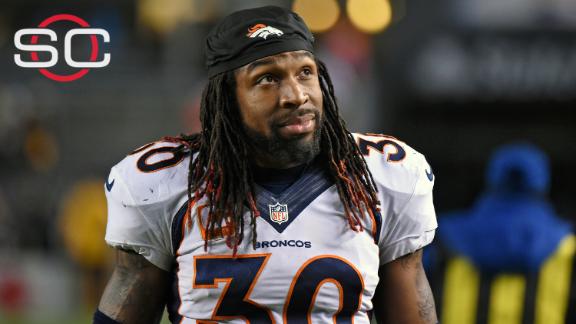 ENGLEWOOD, Colo. -- In the wake of the wild, penalty-filled ending of the Pittsburgh Steelers' win over the Cincinnati Bengalson Saturday, several Denver Broncos players said Monday that they wouldn't hurt the team with an ill-timed penalty.

That doesn't mean the Broncos are any happier about what Steelers center Cody Wallace did to safety David Bruton Jr.last month at Heinz Field.

The Broncos will see Wallace and the rest of the Steelers in Sunday's AFC divisional round game at Sports Authority Field at Mile High.

"It's not going to be anything as far as cheap or anything," said Broncos safety Darian Stewart. "We're going to get them between the lines, between the plays, the whistle. So I mean, he's going to be sore after the game. That's how I see it, man.He comes out on a screen, he better not come at [me]. I'm cutting him. That's where I'm at with it."

"Last time" was the Steelers' 34-27 victory Dec. 20. In the first quarter, Bruton was hit helmet-to-helmet by Wallace after Steelers wide receiver Antonio Brown had been tackled.

Wallace left his feet as he approached the pile of players and dove, striking Bruton with the crown of his helmet. The medical spotter in the stadium stopped the game so Bruton could be taken from the field and evaluated.

Bruton did return and played 77 plays on defense, 62 of those after he suffered a fractured right fibula two plays before the Wallace hit. He was placed on injured reserve the week after the game.

Wallace was flagged for unnecessary roughness on the play and later fined, but many Broncos players, including Bruton, believe the hit warranted a suspension.

"I'm glad he got something. I was worried he was going to get away scot-free," Bruton said at the time. "It happens in the game, granted. It's still cheap and unacceptable. ... You can't just be launching, especially when the guy's been down for two seconds already."

Broncos coach Gary Kubiak said after Monday's practice that he has already made the team's on-field composure a topic of discussion. The Broncos have had some flags this season, especially early in the year, for post-play action.

Cornerback Aqib Talib was suspended a game earlier this season when he jabbed his fingers into Indianapolis Colts tight endDwayne Allen's helmet and poked Allen in the eye.

"Penalties here or there, one play here or there, is the difference in playing another week and not playing at all this time of year. Our guys understand that. ... It's going to be a physical game on both sides of the ball. We know that. You're going to get everybody's best."